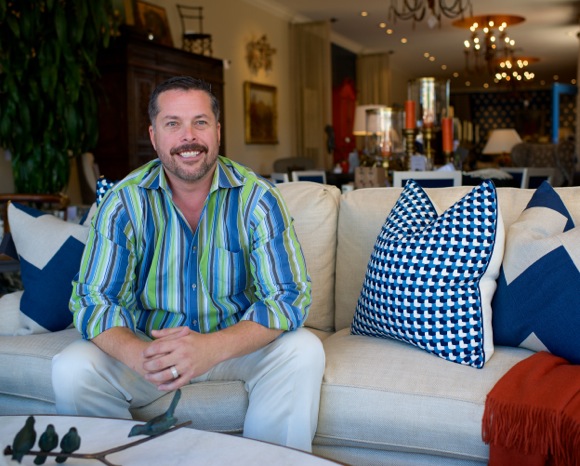 For years, Blair Morgan worked as an interior designer based in San Francisco. But when he decided to open a retail space, he chose downtown Menlo Park.

“There is the old adage, ‘If you’re going to open a shoe store, open it next to another one,” he said, referencing downtown Menlo’s numerous home furnishing stores. “Plus, we always enjoyed working with people on the Peninsula and had more of a connection. Maybe they are less stressed than City people.”

His store, HOME, has been been opened less than a year — it will celebrate its one-year anniversary in November — but Blair is already talking to the local Chamber of Commerce about forming a downtown merchants association. “I think we have a real opportunity to promote ourselves as the place to go for home furnishings in the Bay Area,” he said.

While maintaining a residence in Palm Springs, Blair is also a Menlo Park resident, close enough to downtown that he can walk to work. He grew up in Texas and recalls always wanting a profession where he could work for himself. “I’d moved to the Salt Lake City area to be a ski bum and met an interior designer there,” he said. “I’d hang a sign around my neck, ‘will decorate for lift tickets’. I really enjoy design and the freedom to be my own boss.”

One local connection he made soon after opening HOME was getting to know Junior League Palo Alto•Mid Peninsula members who staffed the resale store next door called The Shop. The two stores are collaborating on Tuesday, September 17, from 6:00 to 9:00 pm to kick off the League’s Finishing Touches: A Holiday Home Tour & Boutique with an evening of wine and hors d’oeuvres. Twenty percent of purchases made at HOME that night and from September 19 to 30 will benefit the League. (Note: the Junior League asks people to RSVP to HOMEShopParty@gmail.com.)

Blair is planning future events for HOME, such as bringing in people from the interior design industry to talk.

Why a home store named HOME? “I’m losing my mind as I get older, so I needed to keep it simple,” he replied with a chuckle. “But also because ‘home’ means different things to different people, and it’s our goal to help them create their ideal home.”