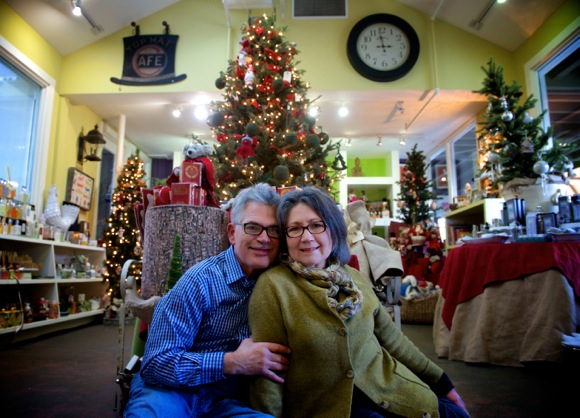 Editor’s note: From now through Christmas, we’ll be checking in at various local merchants, with an eye to shopping locally.

Is it possible that Mercedes and Juan Navarro have body doubles? Stop in almost any day or time at Ladera Garden & Gifts, and they are present.

“We don’t take many vacations,” said Mercedes. “We do close between Christmas and New Year, although Juan comes in. When you have a small business you have to take care of it.”

They learned the business together. They each arrived from Mexico about four decades ago and met at a company that manufactured floating devices for swimming pools.  “It was love at first sight,” said Juan, which made Mercedes chuckle.

In 1982, Juan was working at another nursery in northern San Mateo County when they heard about a nursery in a place called Portola Valley that was for sale. “The owner wanted to retire and was looking for a young family to take over,” said Juan. “We became that family.”

Added Mercedes: “Neither of us had even heard of Portola Valley. And while we knew each other from being married, we had never worked together. It was kind of like meeting a new person.”

“She has her customers, and I have mine,” said Juan.

In 2006, they made a decision to expand, taking over the space that housed a restaurant next door. With the help of PV residents Patty Brady and Mary Adams, they added a large selection of gifts at various price points. “We think of it as a little bit of everything.”

They’ve operated the nursery while simultaneously raising three children and cite the gift store expansion as the greatest challenge they’ve faced, weathering the recession that followed soon after.

Having persevered for this long, soon they may even get to take a vacation. Their youngest son will be joining the business once he finishes his degree at San Francisco State.

Photo by Irene Searles, who asked the Navarros to pose on the floor

We agree – just the best!