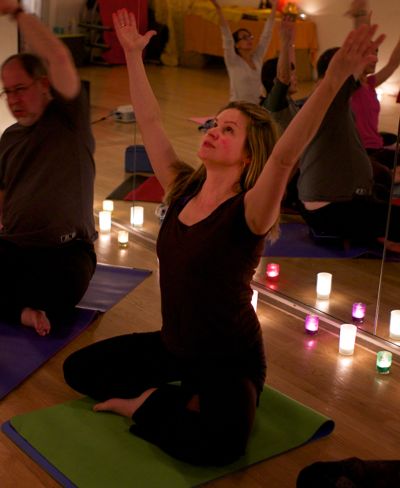 Yoga instructor Keyko Pintz, who lives in the Allied Arts neighborhood of Menlo Park, remembers the question that started it all. “One of my private yoga students asked me if I could do yoga anywhere in the world, where would it be?” she recalls. “The first place that came to mind is Mitzpe Ramon. It’s a crater in Israel’s Negev Desert, an interesting geological formation, and it’s absolutely spectacular. It’s mystical, and it’s the perfect place to feel like you’ve seen something otherworldly and spiritual.”

Keyko says she became enthralled with the concept of building a meditation and yoga center in the Negev. “I explored that idea for awhile,” she says, “and then I thought, instead of building these castles in the sky, like Ari Shavit says, build a tent on the ground. So this is kind of my tent on the ground.”

The “tent on the ground” Keyko is referring to is “Yoga for Israel,” her second-Saturday-of-every-month yoga practice at Menlo Pilates and Yoga.

Keyko became interested in yoga about 15 years ago and currently teaches classes at Menlo Pilates and Yoga, Stanford University, and Google. The other piece in the equation dates back even further. “Twenty years ago I first went to Israel and worked on a kibbutz and became really passionate about the country,” she says. “I felt like this was a really good way to combine my two passions and create a community that is curious about both.” 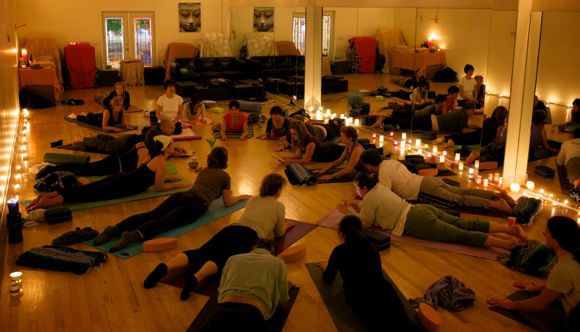 Keyko launched Yoga for Israel this past December and has attracted a yoga-mat packed floor at her two events to date. It’s an evocative scene: meditative background music, dozens of small votives flickering in silhouette against studio mirrors as Keyko leads participants through gentle stretches and poses, with the slightest aroma of red currant candles scenting the air.

Intertwined with the music, Israeli poetry is read aloud, words from Yehuda Amichai’s Open Closed Open, a back-and-forth lyrical duet, first in Hebrew, then in English. “The soul inside me is the last foreign language I’m learning,” Keyko reads from Amichai’s poetry. “This is not about some kind of perfect execution of yoga poses,” she says. “It’s more like the yoga poses are meant to open us and be the conduit to feeling what the author has to offer.”

Keyko wants to make Yoga for Israel a standing social event in Menlo Park, an evening of yoga, shared Israeli food and drinks and even movie screenings. “I want to have a place that’s very welcoming for people to learn about Israeli culture in a non-threatening, non-political, non-religious way. Anyone who wants to learn about Israel is welcome to come,” she says.

Yoga for Israel is scheduled for the second Saturday of every month at Menlo Pilates and Yoga. The next practice will be Saturday, February 8, at 7:00 pm. The suggested donation for participants is $18.

I’m impressed by Keyko’s creativity! The program looks quite popular. I hope it just keeps growing.

I’ve known Keyko for 17 years…she is a superb educator on every level, and a deep impassioned thinker. Thank you for an article that captures her so beautifully!

Thanks Laura for your support and confidence.

Dawn, I hope to see you at one of our classes in the future and thanks for your good wishes.

Adele, we meet every second Saturday of the month and our March meeting is on the 8th at 6:30pm. Please sign up for updates on our website…www.yogaforisrael.com. I look forward to meeting in the near future.

I wish I could make it to your Yoga class. It looks like I’m not the only one!!! Congratulations!!!