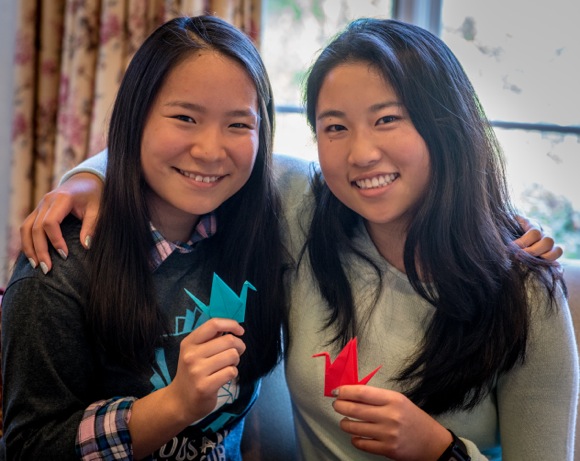 When nearly 200 seniors take the stage March 21 in Menlo-Atherton High School’s annual fashion show, they will be outnumbered by thousands of cranes. Thousands of colorful multi-size origami cranes, to be precise, artfully designed into two show-stopping black floor-length gowns.

“On the M-A announcements this year, they said the fashion show was offering a segment for people who want to design their own dresses,” recalls M-A senior Katrina Wijaya (pictured right). “And I thought to myself, ‘I should make a crane dress.’”

Katrina founded M-A’s “Thousand Crane Club” in Fall 2013 to teach and share her passion for origami with other students. Inspired by a Japanese legend (if you fold 1,000 cranes, your dream or wish will come true), the club hung their first 1,000 cranes at the Children’s Peace Monument in Hiroshima, Japan and sold hand-crafted origami cards and ornaments to raise money for Lucile Packard Children’s Hospital.

Katrina recruited her friend and fellow club member, Misato Muraoka (pictured left), to join her in the design trenches. “For most people, it takes three to five minutes to fold a crane but we’ve had some practice,” says Misato. With each crane requiring close to 20 folds, they say it still takes them one to two minutes. “It has been a lot of constant folding,” adds Katrina. “We’re spending hours each day working on our dresses.” 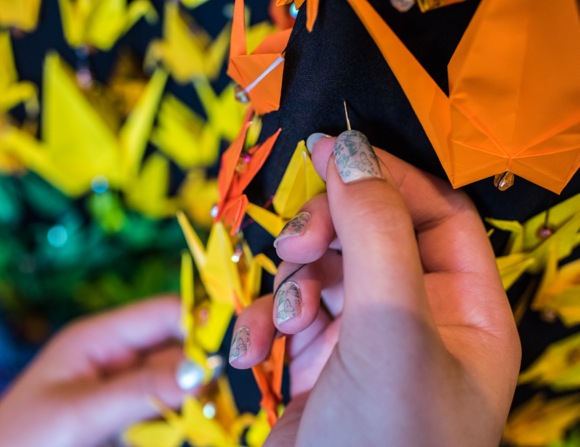 The actual design of the dresses is a tightly-kept secret, but there’s talk of “gradients” and “rainbows” and “density.” Katrina says her sewing technique allows for flow and movement while Misato is aiming for a different effect: “I’m sewing on each one individually at the base, and then I’m going to open up each crane on the dress so that it’s bigger. I have no idea how long that’s going to take.”

With the fashion show date approaching, the pressure is mounting. “I’m kind of feeling anxious right now,” says Misato, and Katrina nods in agreement: “It’s probably worse than right before a paper is due because you know you can get that done and this is something we’ve never experienced before.”

Both girls acknowledge it’s a lot to pile on top of a busy senior year, but they are eager to unveil their creations on stage. “I just feel like it’s going to be a memory that’s going to live with me for the rest of my life,” says Misato. Plus, there’s another benefit to being in the show’s grand finale. As Katrina points out with a smile, “They put us in the final segment with all the boys in tuxes.”

The Menlo-Atherton Fashion Show, M-A’s largest PTA fundraiser, is scheduled for Saturday, March 21, with performances at 1 p.m., 4 p.m. and 7:30 p.m. at M-A’s Performing Arts Center. Tickets can be  purchased online or at the door.

M-A students never cease to amaze me with their ingenuity and drive. We are very fortunate to have several M-A students in our program here at Kuk Sool Won™ of Menlo Park. You kids ROCK!