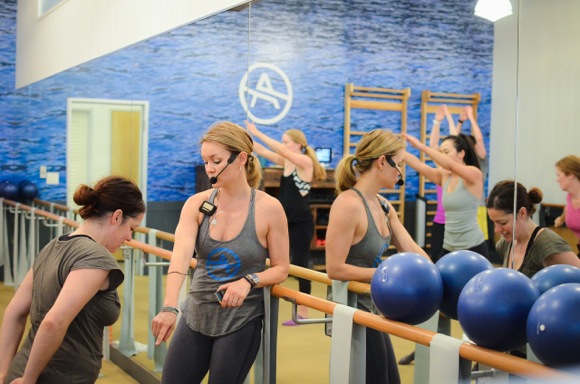 I just finished taking an entire year of chemistry in high school, only to find out —ironically, through the owner of an exercise studio — that alkaline does not just refer to certain metals on the periodic table. As Erin Paruszewski, former owner of two Dailey Method franchises and founder of Alkalign Studios in Menlo Park explains, “[It] refers to the pH in your body. You want it [to be] alkaline, not acidic.”

Last year, InMenlo featured Erin and her work at the Dailey Method. With the contract expired on both of her studios, Erin decided to take them private in order to have the freedom to innovate and evolve. When asked about the spontaneity of this endeavor, she states, “A little piece of me has always wanted to do it.” 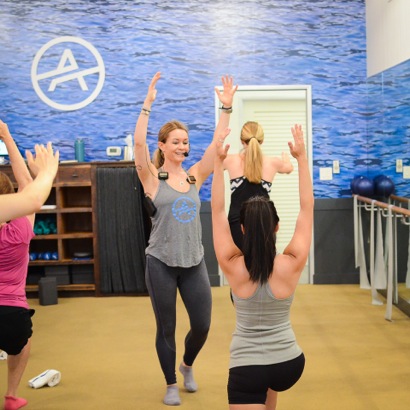 Laughing, she says that the process took “somewhere between seven weeks to seven years.”  To her, the experience is “the scariest and most exhilarating thing [she’s] ever done.”

According to Erin, the name, Alkalign, is a combination of the alka- from“alkaline” and the –lign “align” and emphasizes the studio’s push for alignment of one’s body and life.

As part of this new studio, Erin hopes to add new class formats, such as Recharge — a class aimed at therapeutic stretches and recovery — and Alkalign Elevate for advanced participants. On staff, she has hired a dietician and nutritionist, has formed an Innovation Team and a Training and Development Team, and has connected with specialists in certain fields, one being alignment. In addition to new classes and staff members, Alkalign now offers food and beverages for customers. In fact, “some people just stop by to grab lunch,” Erin claims.

Both the studio in Los Altos and the one in Menlo Park reflect Erin’s personal beliefs and core values. “I do this because I want to contribute something to the community,” she explains. And whether that contribution comes in the form of food, stress relief, exercise, or a sense of community, she strives to make Alkalign the foundation for it.

With that in mind, one of Erin’s aspirations is to help people be the best version of themself possible and attain their goals. “We welcome people to come in for whatever they need. People come to be part of something.”

While she struggles to name a single favorite aspect to her new studio, Erin maintains that the best part of each day is connecting to clients and the community. However, the expectations of that same community have been one of the hardest challenges for her. “[The biggest challenge] is trying to make everyone happy. I don’t like to disappoint people.”

In addition to founding Alkalign and working as the CEO, she still teaches classes at both locations, which I sampled at the Menlo location. Previously, when I voiced my concern about being “bad” at the exercises and stretches, she emphasized that it’s “not about [being] perfect, it’s about being who you are.” And now, after taking the class, I can safely say that her studio exemplifies that sentiment.

The title of this article is misleading… The Dailey Method is already a private organization; Ms. Paruszewski did not “take it private.” What is clear is that she STOLE the intellectual property she was given access to as a franchisee of The Dailey Method and rebranded it under a goofy new name. Instead of developing her own fitness routine, she opted to slap a new logo on her preexisting studios so as to avoid paying franchise fees. As a former member of her studio, I find it extremely disheartening that she would turn her back on the very folks that supported her and enabled her to be a fitness instructor and studio owner in the first place. I’d rather stay loyal to The Dailey Method and its long history of innovation than give my money to some flash in the pan ripoff.

The Dailey method is a challenging franchise to be a part of. There are so many benefits but so so many obstacles as well. The owners are easily tainted by others opinions and thoughts. You don’t know unless you work closely with the owners and teachers. Just like anything else it is a cult and can be like a clique. I respect Erin for branching out and doing her own thing and I’m glad she is doing what makes her happy regardless of what others say.

Jennifer, such hostility in your email. The new studio ALKALIGN has such great energy. I applaud Erin for creating an environment that encompasses all, Mind, body and spirit. Erin wasn’t able to expand her vision under the DM franchise model. Taking your dream and making it a reality; that’s America.