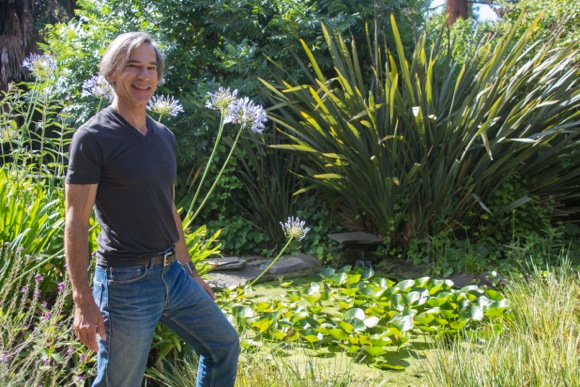 Dan Dieguez grew up in the Menlo Park home he lives in currently. But it’s his personal stamp that’s transformed the large backyard into what he calls a “wildlife garden.”

“My friends call it ‘organized chaos,'” he explained during a recent visit accompanied by Menlo Park-based photographer Frances Freyberg, whose photos of the garden are featured here. 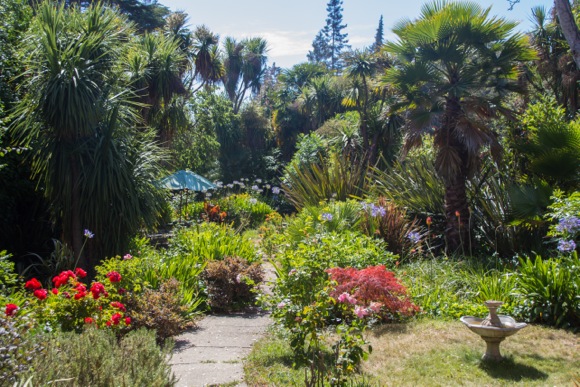 “I landscaped it with the view from the kitchen window in mind. There are many gardens within the garden, and it’s all a little wild. I like jungle parts of the world.

“When I planted the palm trees they were two or three feet tall. I thought at the time, ‘This will be an exotic forest when I’m an old man.’ Guess that time has come!” 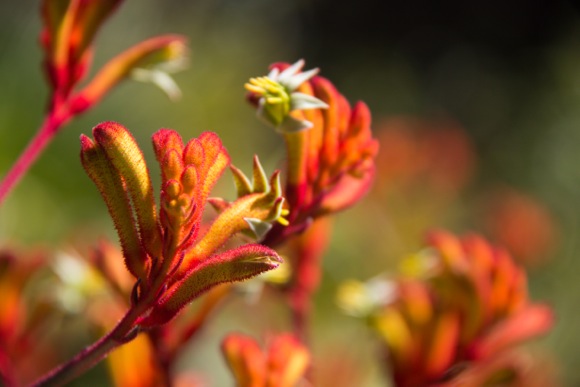 Some of what is in the backyard Dan inherited from his parents, like the Mulberry tree, boysenberry vines and roses. Other plants he scavenged from “Steve the garbage man” who once lived next door and brought home clippings of one kind or another.

One impetus for the garden was the fact that he’s around the house a lot. He works as a personal trainer and one of the out buildings is filled with equipment and weights. Another building houses tools and a whimsical display of license plates. 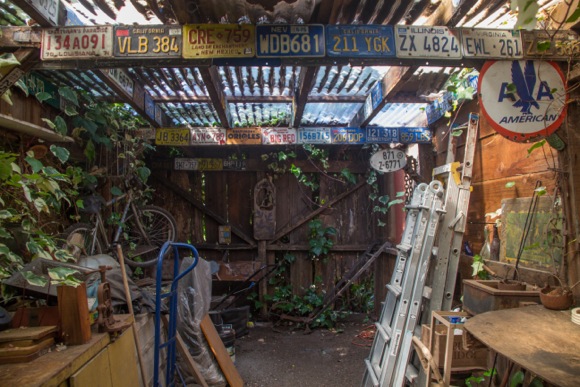 “I’m constantly changing things around,” he said. “I dug the Koi pond in 1999 and have let it grow over to discourage herons and egrets from eating the fish.

“I view the garden as a giant art project, a mix of painting and sculpture. This is a wild forest that I keep barely civilized.”

Around every corner is a surprise. Dan has transformed one Redwood tree into a kind of Bonzai Redwood forest that’s never higher than 25 feet. A Century plant acquired from Steve the garbage man is currently flowering. Dragon flies buzz over the pond, and a Gulf Fritillary butterfly cocoon is attached to a plant near the large viewing deck. Pathways lead to sitting areas with different sun exposure.

“What is so satisfying about the garden is that thanks to all the shapes and the variety of foliage it looks good even in the bleakest winter,” Dan said. “I also love all the big trees off in the distance. I keep my trees short enough so I can also see those trees, too.”

Looks like a mess with the dying lawn and weeds throughout! He is “protecting” the Koi fish by letting it grow over…..I think these fish have rights…..they need an open space to swim and eat……when was the last time Egrets or for that matter any type of Crane has flocked into MP, let alone his back yard. Come one PC police, lets get this lot cleaned up…..the city should be on top of this…..!!!

Oh Craig, what ridiculous comments! (Is this a joke?) Please let me inform you.

Have you heard about the drought and water conservation? That’s why the lawn is brown, for now. It will recover when the rain returns.

As for the weeds (also known as native plants), so what! This is a wildlife yard and as close to natural as I can make it. Some weeds I control and others I let grow. Many of them have flowers. They provide food and cover for various birds, bees, butterflies and other insects.

You obviously know little to nothing about koi fish. They like to hide in the water plants, and also eat them. They have plenty of room to swim around in the 2 foot deep water. The koi I have grow a lot each year, as do the goldfish, which have been breeding. They are not stressed or unhappy as you have implied. By the way, I’ve been keeping and raising fish as a hobby for over 50 years.

As for the herons and egrets…I realize it sounds bizarre to a lay man, but these birds are a common problem with pond keepers. The last time I saw a great blue heron in my yard was about 3 weeks ago. I have seen them in and around my yard countless times over the years. They have eaten lots of my fish, mainly large goldfish. They do not come here in flocks. These birds often sleep and nest inland, away from the bay. I have photos of them in my yard.
I’m sorry you don’t appreciate what I have done with my yard.
I love it the way it is!

Daniel, your beautiful yard is a labor of love, I can only wish to have a personal oasis like the one you have designed, and it’s drought tolerate. Well done