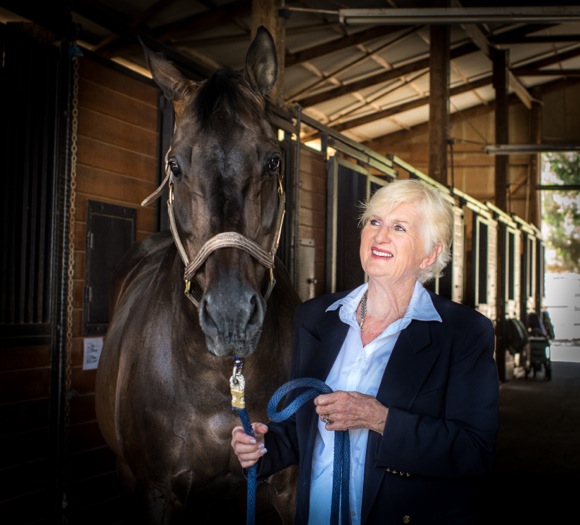 Nancy Robinson smiles when people ask her how long she thinks she’ll be involved with horses. “Guess they don’t understand that once you’re hooked it’s a lifetime thing!” she says.

Nancy’s “hook” was visiting an uncle’s farm each summer in Missouri. She rode there and later began a show career that lasted until 2007. But her involvement with horses continues. She boards about 20 horses at her property, RR Farm, in Woodside. The six she owns are retired, much like Nancy.

“I started showing in amateur hunter classes in 1970, and that was really my passion,” she says. “Horses were secondary.” Probably not wise to mention that to her horse Austin (pictured with Nancy), who follows her around in anticipation of receiving a carrot treat.

While no longer showing, she remains involved with the Menlo Charity Horse Show, scheduled this year from August 4th to 9th. She was recruited to join the founding committee by Betsy Glikburg and remembers the show when it was just a three-day event held in the springtime on the Circus Club’s polo field.

The Menlo show is celebrating its 45th anniversary this year, and Nancy will be overseeing check-in on Saturday, Sunday and Monday. “I know a lot of the trainers and can greet them by name,” she says. She’s also involved with the $20,000 USHJA International Hunter Derby.

“The horses and riders compete in an area that’s made to look like a hunt field,” she explains. “There are about a dozen volunteers involved and we gather foliage and branches. What would be perfect is a downed tree!”

Nancy is quick to underscore Betsy Glikburg’s ongoing contributions over the show’s history. “The Menlo show is the best show for prizes because Nancy and her committee get what they ask for,” she says.

A 501 (c) (3) organization recognized as a USEF Heritage Competition, the Menlo Charity Horse Show benefits the Vista Center for the Blind and Visually Impaired. A daily pass is $10; a pass for the week is $35.00. Children under 12 and those 65 and over are complimentary. Held at the Menlo Circus Club in Atherton, a complete schedule of events is available online.