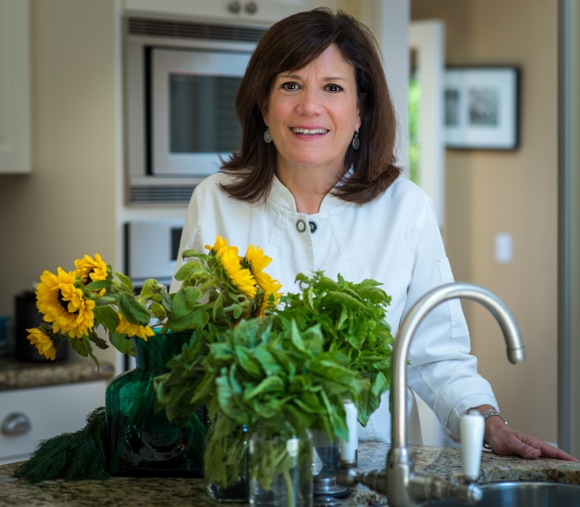 Menlo-Atherton High School grad Margie Ragland Kreibel’s career path post college was not unusual — time spent in public policy for the City of Palo Alto and then sales and marketing at Apple and other tech companies. But then she had an “a-ha” moment.

“I thought, ‘I’ve been doing this for over 20 years,'” she recalls. ‘The people change but the problems don’t. I’m going to do something I’ve always wanted to do.'”

For Margie, that was becoming a chef. She enrolled in an intensive program at San Francisco Cooking School and was among the new school’s first graduating class.

She did her internship just down the hill from her Sharon Heights home — at Flea Street Cafe on the Alameda. “Chef Carlos Canada, who’s now a co-owner with Jessie Cool, was such a great teacher,” she says. “He wouldn’t just tell me what to do but would involve himself by observing what I was doing. He’s explain why that was one way but there were other ways to get the same outcome.”

Margie describes herself as a “personal chef” and “small event caterer” and calls her business Local Flavors, typically doing two to three events a week. “I have some steady clients, like a VC firm I cook for on a regular basis,” she says. “But I go into homes and do dinner parties a lot, too.

“I love what I do. I like the physicality. I like having control of my schedule. I love working with the farmers I’ve gotten to know. I’m doing something that feeds my soul!”