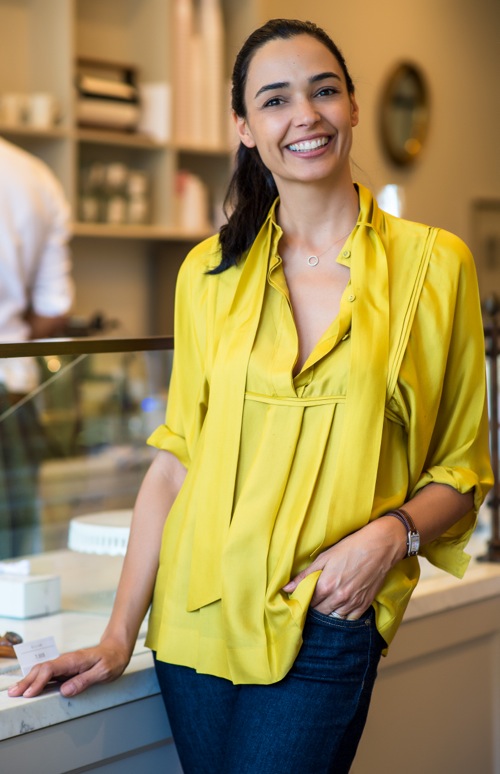 Stated simply, Mademoiselle Colette, a patisserie that opened in downtown Menlo Park a month ago, is the talk of the town. That it’s an instant hit has surprised owner Debora Ferrand.

“I never imagined we’d have so many people so soon,” said the Atherton resident who moved to the area a year ago. “We are selling out of some items and are hoping people will be patient with us. We are still ramping up staff and training people.”

Debora, who is a chef herself but is not in the kitchen at Mademoiselle Colette, is putting in the long hours of a chef, arriving around 5:00 am. She brought pastry chef, Orphée Fouano, from France to oversee the kitchen, which has windows so patrons can see what’s being prepared.

The day we stopped by they had added brioche to the offerings, which also includes tartlettes, eclairs, croissants, along with lunch items like croque monsieur and brunch items like eggs Florentine. There’s a patio in the back of the patisserie where people can sip champagne and enjoy cheese and charcuterie. “We’ll see how long the patio stays open,” Debora said. “When it gets chilly, we’ll probably close it until next spring.”

Debora says she’s had the idea of opening a patisserie for a decade, and the business plan to go with it. “But we moved around a lot,” she explained.

Debora wanted to stress that Mademoiselle Colette is not a restaurant, despite lunch and brunch items. “It’s self-service with people ordering and taking the items to the tables themselves,” she said. “We’re aiming for a relaxed atmosphere where people can enjoy a pastry or bite to eat.”

That she’s found a spot on Santa Cruz Avenue and seems to be fulfilling a need is gratifying to Debora, who was born in Brazil but raised in France. “I’m glad to have come to Menlo Park,” she said. “All of this makes me so happy!”

Mademoiselle Colette is at 816 Santa Cruz Avenue, in the space formerly occupied by Sugar Shack.

A teacher friend-who had lived in France saw the newpaper write up and we went for lunch last week. I’ve enjoyed many trips to France to visit a dear friend. We enjoyed eating out lunch in the patio. I had the Arugula Chicken Salad and it was delicious. Reminded us of being in France.

Debora Ferrand,
Dog people (I’m one) would love you to leave your patio open all year. Heaters, and perhaps a canopy for rain, is all you’ll need. Loved your Croque Monsieur and salad. Thanks for coming to our town!
L.

Congratulations Debora! Happy to see you are living your dream.