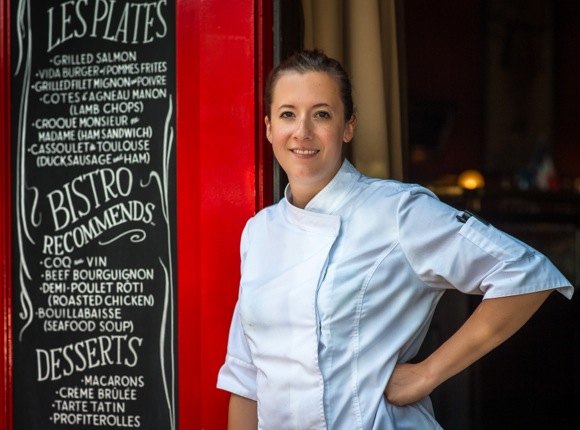 Bistro Vida chef Marine Thomas has been at the helm of the Menlo Park restaurant for six months now, but the Parisian transplant it still getting used to her new country. “I’m still learning about how the seasons here affect the produce,” she said. “It’s different than in France.”

Proprietor Ali Elsafy “discovered” Marine when she was at La Rollange, a restaurant near his Montmartre neighborhood, which was awarded a Michelin star. Over a two-year period, he talked to her about opportunities on the San Francisco Peninsula, eventually helping her with the immigration process.

“She’s wonderful and she’s great,” Ali said. “She’s come into an existing business and can take it to the next level.

“We’ve worked on the menu together. The existing staff needed to be trained. I had to be patient and understand her viewpoint. We both had to bend a bit.”

From Marine’s perspective, living in California “is a dream.”

“Growing up in Brittany, food was important to my family,” she said. “My grandmother was always cooking, and I got interested in cooking when I was a teenager.

“I got the opportunity to attend [French cooking school] Ferrandi. Half the time you are in school and the other half you are in  restaurants. It was a good way to learn.

“Now here I am in California! I love bringing joy to people through food. There is no better gift than the gift of a great meal.”

Note: While Marine is in the kitchen at Bistro Vida Tuesday through Saturday, as of this writing, her special chef menu du jour is offered Tuesday, Wednesday and Thursday evenings.

Marine has brought exactly what Menlo Park has needed! Ali found a gem in this young lady for sure. The menus she creates each week are amazing and well thought out. You can tell that she pours her heart and soul into her work! We enjoy coming here to see what she comes up with! Additionally Ali has a fabulous wine selection that he pairs with each meal so make sure to include this with your dinner!!! Bon Appetite…

Would you ever consider serving Crepes and perhaps a fresh creamy mushroom soup?