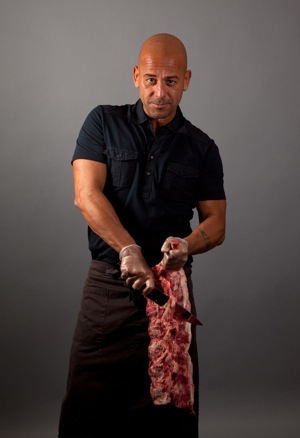 Born in Cairo, Ali Elsafy came to the Peninsula in 1979 after living first in Paris and then New York City. He was waiting tables at a restaurant in Palo Alto and frequented La Luna in Menlo Park on his days off or after his shift. Lucky circumstances allowed him to eventually buy that restaurant and then open Bistro Vida on Santa Cruz Avenue in 1998. “I always wanted to have my own little bistro,” he said. “Now, over the years it’s acquired its own patina.”

We talked to Ali recently about his personal style during a recent evening at the Bistro.

InMenlo: When did your personal style come together — and how?

Ali: I think I’m a romantic. My style is very European. I like nice clothes and nice things. I travel a lot and have been to a lot of places, made easier because I speak five languages — English, Arabic, French, Italian, and Spanish.

InMenlo: What in your wardrobe could you not live without?

Ali: My Montego shirts from Paris. You can’t find them here. My father used to wear them. They make men look like men. When I go home to Cairo to visit my father, I always bring at least one with me. And that’s what I’m wearing in the photo [that Scott Kline took, above].

InMenlo: How long have you sported a bald head and beard?

Ali: I’ve had the bald head for 18 years. I don’t think of myself as having facial hair but I do only shave about every third day.

InMenlo: How much is your style affected by the fact that you’re a restaurateur?

Ali: I think I’d dress the same whatever my occupation was. I sometimes think of myself as much a soccer player as a restaurateur. I’ve played all my life — both on the street and for clubs. My current team has a bunch of English and Irish guys, mostly in our 50s. I’m a middle fielder — a thinker.

InMenlo: Is there something about you that would surprise your customers?

Ali: Most of my customers don’t know that I’m a single Dad. I have two kids, 12 and 8, and have been raising them on my own for the last seven years. One of them attends Hillview and the other goes to Encinal.

The other thing  that may be surprising is that I’m really shy. At Vida, it’s not a problem for me to go from table to table to greet people. Same thing on the soccer field — I can say hello to everybody. But put me in a place like the Madera bar at the Rosewood Hotel — well I wouldn’t be able to say much, I’m so shy.

Editor’s note: While Paris in Midnight plays at the Guild, Bistro Vida is offering post movie goers a free glass of wine to keep the being-in-France feeling going.

Know a stylish person? Send your suggestions to tips@inmenlo.com.

Loved seeing this wonderful article about Ali. I worked with him for several years——from the time before his children to raising his kids on his own. I admire and respect Ali for that and so much more. The food is always good and the service is great. Ali Elsafy is a class act for sure