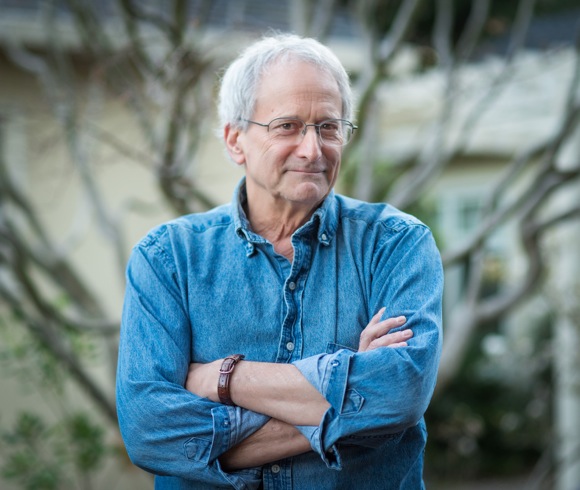 Thanks to a local tie, Menlo Park is in for a treat when Cafe Borrone hosts an exhibit of photojournalist David Burnett’s work, on now through the third week of April. We had an opportunity to sit down and talk with the award-winning photographer at his sister Lisa’s house in Menlo.

“Lisa kept telling me that everyone goes to Cafe Borrone,” said David, who lived for many years in Washington, DC but now lives in Newburgh, NY. “They change exhibits about eight times a year, and it happened to coincide with a speaking engagement I had at the Cantor [sold out] as well as a radio interview with Angie Coiro at Kepler’s on March 9.”(The interview is free, although Kepler’s requests that people register.)

The 21-photograph exhibit at Borrone spans David’s works from 1963 to 2014. Included is his iconic shot of runner Mary Decker just after she fell at the 1984 Olympics in Los Angeles. 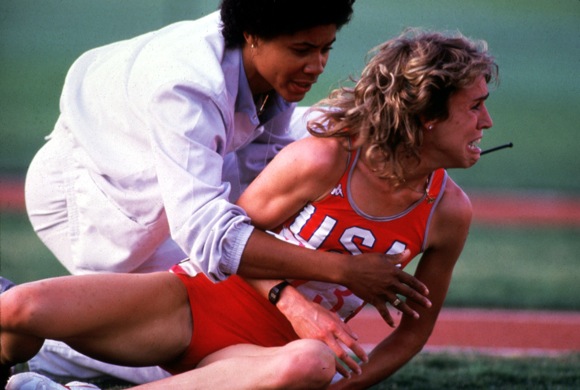 “The key to sports photography is anticipating what could happen,” he said. “What becomes news is what isn’t supposed to happen. Mary Decker was supposed to win, not fall down.

“It happened right across from where I was standing. I’d been at the finish line with all the other photographers but moved along the sidelines and was there to capture the moment she went down.”

Covering the Olympics is something David likes a lot. “It’s very physically challenging,” he said. “There are a lot of long days. After the first few days, you think ‘when will this end?’ But by the final days, you’re sorry it’s going to be over.”

It was looking at old Olympic photos from the 20s and 30s that led to David starting to shoot with a a 60-year-old Speed Graphic press camera and a plastic $30 HOLGA — film cameras in a digital age. 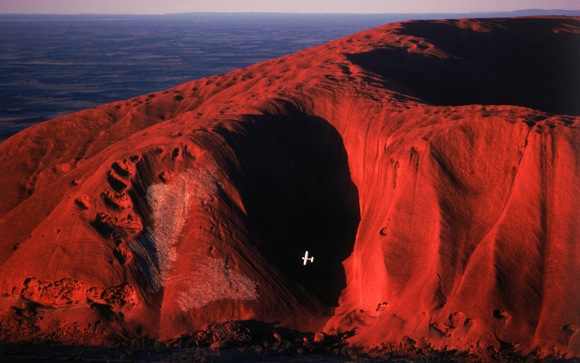 “I did kind of jazz mine up,” he said about the Speed Graphic. “The lens on it wasn’t very fast, and I scoured the Internet trying to find a faster one that would work with it. Finally I found one that was made in the 40s by Kodak. It was used as part of a camera that photographed bombing sites in WWII.

“The combination was amazing. I won the prize for best sports photo in 2005 for work I did for the Athens Olympics in 2004. And I continue to shoot with it, although I also have a Canon 6D.”

David’s work extends well beyond sports. He’s covered wars, politics, disasters, and people living their lives around the world. And occasionally there are landscapes, such as the photo of Ayers Rock reflecting the afternoon sun, which was shot in 1981 and is included in the Borrone exhibit.

Looking back at his work over four-plus decades, David said “I’m glad I lived when I did. It was an era when magazines paid well for photographs. Today the infrastructure for photojournalists has collapsed. And with the arrival of camera phones, now there’s this artificial sense of self-congratulatory greatness.”

A portfolio of David’s work can be viewed online on his website along with a schedule of workshops he offers.

Best regards to David and to his family. I knew him and his brother, Tom in Washington, D.C. back in the day. Last time we were together was at Tom and Harriet’s wedding. I look forward to seeing your photographs.
Sincerely yours,
Bob Berkowitz