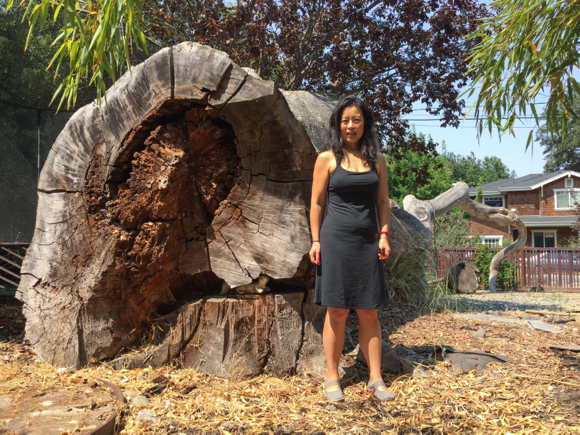 We admit it was the enormous downed tree trunk that caught our eye as we drove by Asia Morgenthaler’s home in Menlo Park. But we soon found there is a lot more to her story than just the tree.

Asia is something of a Renaissance woman. Trained as a computer scientist, she found herself increasingly drawn to artistic pursuits while working in the software industry. Then when the first of her two daughters was born, she gravitated to what she calls “women’s circles.” 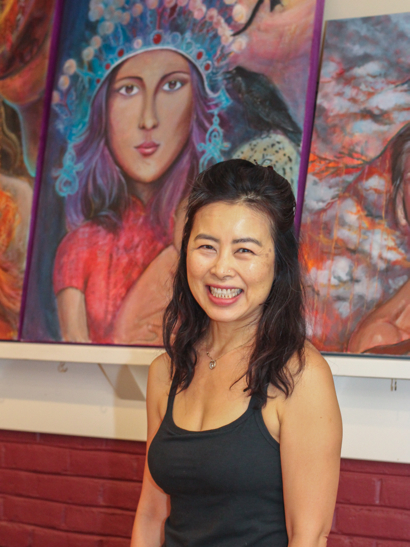 “I believe that women need to be supported by other women on their journeys,” she said. “I was part of a circle when my daughters were young but I didn’t want to be a facilitator. Now after going back to school, I realize that if I’m going to create those circles, I’ll need to facilitate them.”

About three years ago, Asia, who had done ceramics, took up painting. She paints randomly, both from inside her home and in the large backyard. She combines her interest in painting with workshops she holds on “intentional creativity,” which she describes on her website as “creating art and image with intention: it is a painting process that incorporates guided visualization, journaling, and painting to develop a deeper connection with yourself, your inner child, or your inner Feminine.”

“Painting is just one medium that connects with inner knowing,” she says. “I’m finding it’s where I need to be now.”

Painting is not her only pursuit. Concurrently, she is home schooling her two daughters, learning the violin (“long on my bucket list”), learning French, and taking teacher training at Vibe Yoga (“more to deepen my own practice, as I don’t really want to teach”).

Of course, we couldn’t leave Asia’s art-filled home without hearing the story of the tree.

“It fell down 10 years ago,” she said. “It was a huge Eucalyptus tree estimated to be 100 years old. One night shortly before Christmas, we heard this big crash and lost power. The tree had taken out a power pole and left the whole street in darkness. It took 24 hours for workers to just clear the road.

“We decided to leave the base of the tree, and it became a play structure for my girls. They sit in it and read. It’s now a part of our family.”

Photos of Asia’s art and information about her workshops can be found on her website.