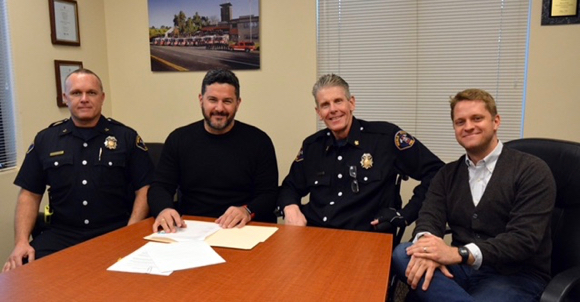 The Fire District officially started its drone program in 2014 and was one of the first emergency response agencies in nation to receive formal authorization from the Federal Aviation Administration (FAA) to legally fly drones last year. Since then the Fire District has trained up six operators, purchased four aerial DJI platforms and recently used the drone to fly critical missions looking for lost boaters in the San Francisco Bay, to monitor record water flows and damage to the San Francisquito Creek, and to document traffic congestion along critical emergency response routes.

“We’ve been meeting with Matternet since October of last year, discussing how to best collaborate and drive this specialized field and its evolving technology forward to a more useful, functional and beneficial purpose for first responders” the Chief said. “We will use this partnership as an anchor point to open the door to other innovative and interchangeable operational capabilities…We’re focused on guiding individuals or groups towards results that make sense to first responders so they are actually creating useful tools, not toys, that can enhance real world emergency operations.”

One of the key elements of the Matternet system is an interchangeable M2 payload box which has an internal dimensions of 19 by 11 by 13 cm.

“The standardized payload box configuration allows us the flexibility to work with other vendors and develop a number of useful and essential emergency services applications such as an advanced situational awareness and firefighter tracking capability, multi-camera, chemical sensor, scene lighting and other equipment payloads that would be beneficial to first responders. It can also be used to carry equipment such as defibrillators, oxygen, medical equipment, life preservers or other equipment that could enhance emergency operations and save people’s lives.”