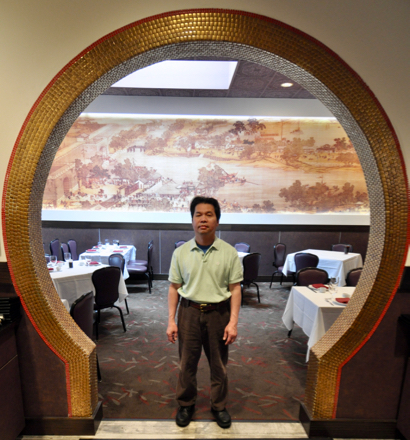 You can eat breakfast, lunch and dinner at restaurants Jason Kwan owns in Menlo Park, and you can actually walk from one place to another. That’s what Jason does daily as he looks in at each of his businesses.

Three of his restaurants bear his namesake, at least partially — J & J Hawaiian BBQ, Jason’s Cafe, and Chef Kwan’s. He bought the latter in 2015 from the family that owned Su Hong To Go, along with the long-shuttered Su Hong sit down restaurant on El Camino.

The immediate name change of the To Go restaurant was a requirement of the deal, as there is another Su Hong owned by a different family member in Palo Alto. The sit down restaurant was finally reborn in late January and renamed Yum Cha Palace.

Jason immigrated from Vietnam in 1982 and attended James Lick High School. He had no formal education after that and described his restaurant knowledge as self-taught. “I’ve worked every job in a restaurant,” he said. “Dishwasher, bus boy, waiter. I watched others and learned how to cook and manage.”

He said the reason it took so long to open the sit-down restaurant was all the different permits required as well as the remodeling, with some of the materials ordered from overseas suppliers.

“It’s exciting to finally be open,” he said. “I like socializing with the customers, learning from them.”

Given that he owns four restaurants offering four different kinds of food, we were curious what he liked. “Like my children, I like American food,” he said. “Pancakes, omelettes, bacon and ham — they all feel new to me.

“When I came here 35 years ago, it seemed like everyone was eating like crazy. Now people want to eat healthier — seafood and vegetables. So that’s what we’re focusing on here.”

Best of luck to Jason and his endeavors,seems like what happened to Su Hong sit down,Su Hong take out and many other(Famous Chefs) come to Menlo and their restaurant’s die,don’t make me name names….