Atherton resident Laura Daschbach Pitchfork spoke from the heart to Palo Alto High School and Castilleja students this morning about how gun violence affected her family and so many other families that she knows. Laura’s youngest sister, Michelle, was killed in October, 2011, at a hair salon in Seal Beach, CA, along with seven others.

“While Michele did not die in a school shooting, the tragedy, like any mass shooting, affected an entire community. Everyone in the small town of Seal Beach knew at least one person who was killed that day,” Laura said. “The pain of that day is raw and etched forever in my heart. But my pain can’t compare to the pain felt by her three children who lost their mother that day.” 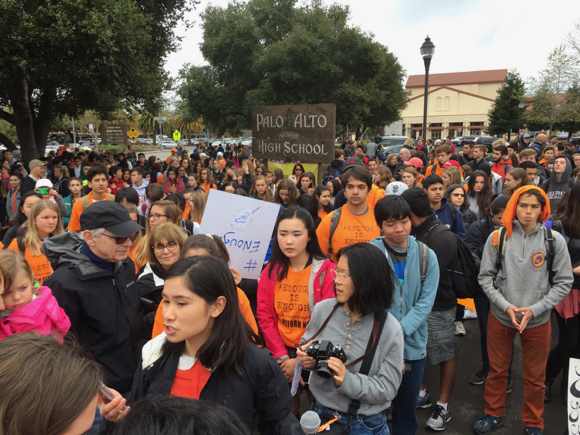 She concluded her speech: ‘Today we are here to memorialize the 17 who lost their lives at Marjory Stoneman Douglas High School and to honor those who survived, many of whom have found the courage to stand up and say “No More.” But we also need to remember all victims of gun violence. Victims like Aya, a Sacred Heart Prep graduate and a friend of my sons’, who was randomly shot in Oakland while driving home from a pick-up basketball game. Sean, whose parents are good friends, who took his own life with a gun. Noah, a six-year-old who died at Sandy Hook, whose grandmother, a friend, lives in Aptos. Kate Steinle, a classmate of my nephew at Amador Valley High, who was killed in San Francisco. And just this week, Jennifer, a St. Francis graduate and classmate of another nephew who was killed at the Yountville Veterans Center. This is not Parkland, this is Palo Alto, Atherton, Mountain View, Pleasanton. Right here in our community. This is our story and WE need to rewrite it.

“The Parkland survivors, like all survivors of gun violence, will live their lives with the horrific memories of that day.  But we can use this tragedy for good.  By uniting in this fight, let’s push Congress to do what is right, to pass sensible gun laws to insure that we are safe from gun violence. Let us channel our anger and the momentum led by the Parkland teenagers, to make changes, to design a future that is peaceful and safe for all. Together, we can rewrite our story.”

Administrators at Paly and Castilleja were on record as supporting students’ right to protest without sanctioning the walkout.

Well spoken Laura, these tragic shootings have to stop.

Thank you so much for these words. Gun violence has reached into every community. I lived in Menlo Park (my father, Earl Lewis, was a friend of your father) and now live in East Sacramento. I have been robbed at gunpoint myself while shopping in my own low-crime rate neighborhood. I am so grateful to the young adults who are standing up against gun violence. I will proudly march on March 24 to send the message that the Second Amendment belongs to all of us.