Reminder: Walk for Our Lives event in Menlo Park on Saturday, March 24, organized by Katharina Powers

As we reported earlier this week, Menlo Park resident Katharina Powers (pictured) is organizing a walk on Saturday, March 24 in homage to the many marches being held around the country calling for stricter gun control legislation, joining forces with artist Lin Evola who creates sculptures out of metal melted from guns. It will start at Art Ventures Gallery (888 Santa Cruz Avenue) at noon, walking on the sidewalks along SCA to Hillview Middle School and back.

Katharina, mother of four children, draws on her experiences in Germany to advocate for change.

“I met Lin Evola the day after the Parkland, Florida, shooting, and I tried to initiate a gun buy back project for Silicon Valley with the mayors. I sent emails to 30 mayors, four responded. So my mission is to support the kids.” 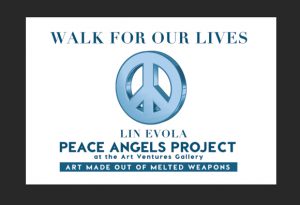 “…I am proud that I saw so many kids walking out March 14th and meeting them in the streets of Menlo Park and Palo Alto. It is a start, but we need this to continue until we have our goals reached.

“When I was a student, I went to East Germany every Monday demonstrating to take the Berlin Wall down, and we did it. We were persistent, devoted, and stood up. The wall came down. Right now we need to stand with the students and make a change.”

Artist Lin Evola has been fighting this fight for decades. A United Nations delegate who attends closed meetings on disarmament, Evola has always been passionate about getting guns off the streets and has done something artistic to support her cause. She creates “Peace Angels,” sculptures forged out of melted metal decommissioned nuclear stainless steel, guns, and other weapons of mass destruction.

She has received tens of thousands of street weapons from the NYPD, LAPD, LASD, as well as other California law enforcement agencies, and has created sculptures for Los Angeles and New York. Currently, she is in the process of creating a Globe Peace Sign monument for the Bay Area.

Thanks for your good efforts! I grew up in Menlo Park and went to college with Lin Evola and am so excited to see her name and know her art is making such a positive difference in the world! Very best wishes for a terrific turn-out that effects positive change!