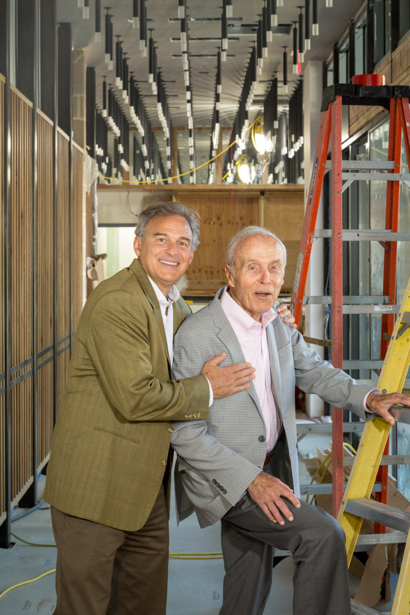 Jeff and Jim Pollock at the Park James Hotel in Menlo Park. The Hotel is expected to open late in the summer of 2018. Photographed on June 22, 2018 by Scott R. Kline.

Partners in a financial services firm as well as real estate developers, father Jim and son Jeff Pollock can also make beautiful music together. Banjo-playing Jim has performed for six Presidents, and serious piano player Jeff is the founder of Hearts of Silicon Valley, whose mission is to engage people with a passion for worthy causes through the sharing of music and community.

That father and son are in sync in many ways was evident at a recent interview at the currently under construction Park James Hotel on the corner of El Camino Real and Glenwood Ave. in Menlo Park.

The 61-room hotel plus two deluxe suites is set to open later this summer. It will be home to a California craft kitchen restaurant, Oak + Violet, named after the city tree and city flower of Menlo Park. The hotel’s name is a nod not only to Jim but also to Dennis James Oliver who was the initial inhabitant of the city. It will also feature a lobby bar, a landscaped courtyard to accommodate outdoor meetings and events, and 1,200 square feet of indoor meeting space.

“The Park James is a true labor of love for the company, and our chance to give back to the community of Menlo Park,” said Jim, President and CEO of Portola Valley-based Pollock Financial Group as well as Pollock Realty Corporation, which is redeveloping the property, the site of a former Shell gas station. The project was granted a Public Benefit Bonus to exceed the Base level floor area ratio (FAR), in recognition of the significant and recurring tax revenues the hotel use will provide to the City of Menlo Park. 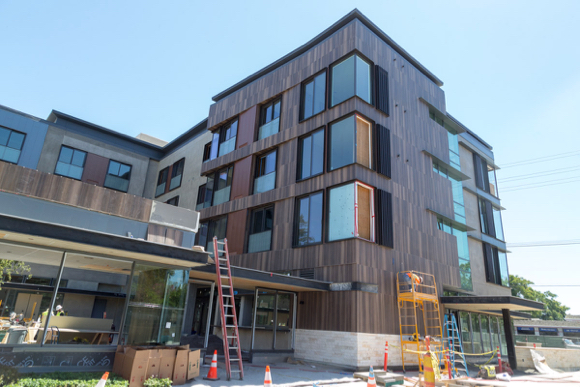 The under construction Park James hotel in Menlo Park, CA

Pollock Realty Corporation has purchased or developed 93 real estate projects, but this is only their third hotel project. “Our last project was a medical building at 321 Middlefield,” said Jeff. “We were looking for another project to do and found this property, outcompeting 10 other offers. The City really wanted a boutique hotel.”

In keeping with father and son’s musical abilities, there are plans in the works to have musical performances on weekends and some Friday night, often featuring local musicians. Jeff and Jim both know Freddy Clark from Menlo Park and other local performers.

But to get things started with a big bang, Jeff is in contact with a Rock ‘n Roll Hall of Fame singer/songwriter to perform in September. We’ll update with details at they’re made public.

It’s wonderful to know there will soon be more places in Menlo Park to hear live music! If the Pollocks (or anyone else) ever need well-vetted acoustic musicians, I’d be happy to share my Dala’s Nest House Concert contacts and artists’ websites. I can’t accommodate everyone at my small seasonal venue, but I do endeavor to connect musicians to one another for their own and the community’s benefit.

Fun to read about the project and wish you the best. It has been years since we have set eyes on each other. Glad to hear you are still kicking.

The Park James hotel is an eyesore! Too ugly for my taste and about 100 other people in the Do you remember the old Menlo Park on FB. I predict more accidents when people try to make a right turn into their garage! More traffic.