What is that truck doing on the ground? Menlo Fire Captain Seth Johnson explains 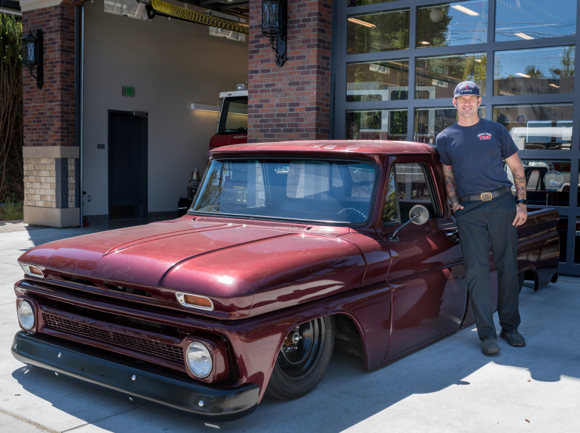 We were on assignment with InMenlo contributing photographer Irene Searles when we came upon an astonishing — and puzzling — sight. Parked in the driveway of the new fire station on Oak Grove Avenue was an old Chevy truck whose chassis was completely touching the ground. We’d seen “low riders,” but this was taking it to a new level [down]!

Venturing inside the fire station, we tracked down the truck’s owner, Captain Seth Johnson, who’s been with Menlo Fire for 16 years. He’s working on restoring the 1964 Chevy Truck, which he’s owned for about five years.

“The car is raised and lowered with the touch of a button,” he explained. “When it’s being driven, no one would know. It’s an anti-theft mechanism that was part of the truck when I got it.”

Seth said he’d heard that the system was used on Mercedes Benz vehicles in the UK, but a quick search of the web couldn’t verify that fact. If any InMenlo readers have heard about lowering cars/trucks to prevent theft, we welcome your comments!

Very impressive and the Tatoo’s as well….makes you just want to hug the friendly fireman!!