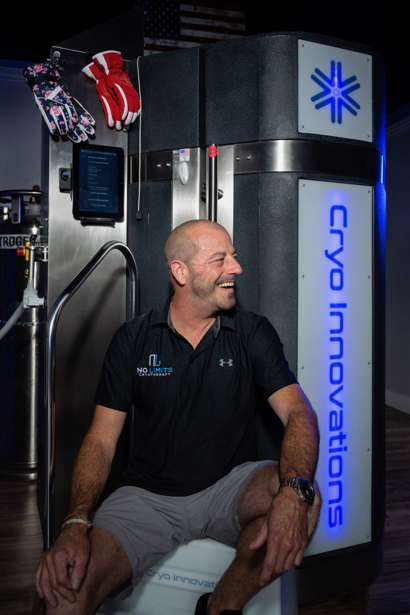 John Jennings found himself at a crossroads. The Peninsula native had worked for a couple decades in the pool maintenance business, but there was a knawing feeling that he was meant to do something else. While investigating just what, he discovered cryotherapy. And that led him to open No Limits Cryotherapy at the Sharon Heights Shopping Center in October.

“I’d always cruised through life,” he said. “But pulling this together, I developed serious anxiety. I got help for the anxiety and kept repeating my mantra, ‘My will is outstanding, my shovel is sharp, and failure is not an option.”

A serious mountain biker and scratch golfer, John was always looking for a competitive edge. Like other athletes, he’d spent hours in post-competition ice baths. “I’d always thought, ‘There has to be a better way to heal post-exercise,'” he said.

His research led him to cyrotherapy. People are immersed in a cold chamber in which liquid nitrogen is used as chilling agent to drop skin temperature down dramatically. In can be effective in relieving muscle pain, reducing swelling after soft tissue damage, improving circulation and speeding up metabolism.

“It’s a holistic way to heal,” said John “It’s not new. A Japanese doctor invented it in the late 1970s.

“During the session, your brain goes into survival mode. Your capillaries expand three to four times their normal amount and pump blood to the problem areas.

“When you get out, your norepinephrine levels can be five-fold the normal level, affecting natural pain relief. People exit the chamber feeling a sense of rejuvenation and report sleeping much better that night.”

John’s business is located behind Dr. Bill Tarr’s chiropractic practice, and many of his clients are also Dr. Bill’s clients, rather than the hardcore athletes he thought he’d attract.

“People come out of the chamber after an initial session and hug me,” he said. “On their return visit, they bring me cookies.

“I’ve always been a giver. It’s hard for me to receive. Doing this, the satisfaction of helping people is paramount.”