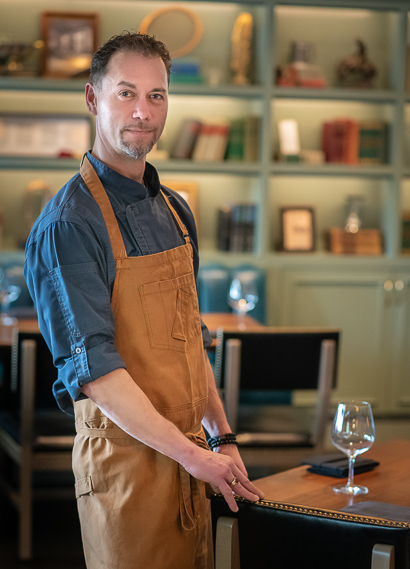 A new restaurant, Menlo Tavern, overseen by a new chef, Jason Dalling, opened on March 11 at the Stanford Park Hotel in Menlo Park.

The interior space of the former restaurant has been totally redesigned, offering homage to Stanford Eating Clubs. Booths now line one side of the space, and a book case filled with “this- and-that” adds a homey but sophisticated touch.

Chef JD, who hails from Canada, told us his approach to food is to “allow it do what it does naturally.”

“My interest is to deliver classic dishes that are not overly manipulated,” he said, adding, “No fluffy garnishes.”

As befitting a restaurant with Tavern in its name, there’s a comprehensive menu of classic and signature cocktails in addition to craft beers on draught. Of note: A children’s menu is also available. And there’s no corkage fee on up to two bottles of wine per table.

Chef JD draws on his Canadian heritage in creating his dishes. “Growing up in the far northern part of British Columbia, my family was self -sufficient,” he said. “I’d work the tractor and split wood. But I was really drawn to assisting my mother in the kitchen using her large cast iron frying pans.

“Being from such a small town, I aspired to be the greatest chef in the world. I started working as bus boy and was lucky enough to have opportunities that got me into the kitchen. All of that led to my 10-year tenure with Fairmont.

“I consider myself modern in my approach to food. I refer to it as comfortable food, not comfort food. I’ll take a classic like Mac and Cheese and subtly rework it.”

I recently stayed at the Stanford Park Hotel and can’t stop thinking about the delicious HOUSE MADE GRANOLA that I had for breakfast every day. Is there any chance of getting the recipe?