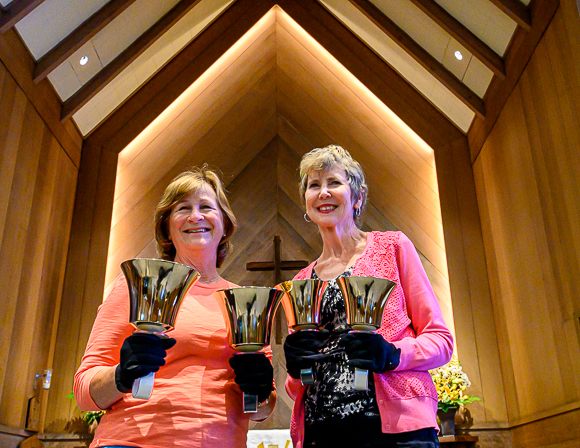 The Bell Choir at Trinity Church in Menlo Park is celebrating its 21st anniversary with a concert on Sunday, June 9, at 7:00 pm featuring a selection of classical, popular and sacred music — a range to please most everyone according to founding — and longest tenured members — Shirley Hagey (left in photo) and Mary Pless (right).

It was Mary who took the lead in getting the music group started. “I had played in a bell choir with my sister during grade school,” she said. “It was fun, but unlike my sister, I didn’t keep it up. She was a lifetime ringer. She died from breast cancer in 1997, and I approached Trinity’s music director at the time, Trudy Minkler, about starting a bell choir at Trinity in her honor.”

Shirley was a natural early recruit, given her friendship with Trudy. “It seemed like a fun idea,” she recalled. “Trudy didn’t know how to play but she went to some workshops and learned.

“What I like about it to this day is that it occupies my entire brain when playing. It’s all I can think about at the time. And it’s also great being part of a team.”

Today, Trinity Ringers is made up of 19 members, most of whom, but not all, are Trinity members, and not all are of the Christian faith.  Over the years, 26 other people have played with the choir at one time or another. Children have played along with their parents. Adult children of members have met — and married!

Through donations to the Bell Fund, the choir now owns five octaves of Malmark bells and four octaves of Malmark chimes. They will be augmented at the anniversary concert by piano, harp, alto saxophone, violin, viola and percussion. “We’re playing some challenging music but rising to the occasion, with thanks to our director, Rick Hoffmeister.” said Shirley.

Lest you mistake the concert for all solemn and serious, we can tell you that Shirley is teaming with bell choir member Marty Arscott on a rendition of the Copper Clapper Caper, made famous by Johnny Carson and Jack Webb. You can refresh your memory (or see what it was all about for the first time) online here.

“The one thing about bells is that you don’t need a lot of musical experience, although you need to be able to count,” said Mary. Added Shirley: “Having natural rhythm is a big help!”

So, evidently is an affinity for chocolate, which Shirley described as the choir’s “glue.” “Our rehearsals last for two hours, all standing,” she explained. “So after an hour, we take a little break and eat chocolate. Our stash features a variety from around the world that choir members contribute.”

There is no charge to attend the 21st anniversary concert, although there will be a free will offering that will go to the Trinity Ringers Fund for equipment and musical scores. A reception will follow. Trinity Church is located at 330 Ravenswood Ave. in Menlo Park.