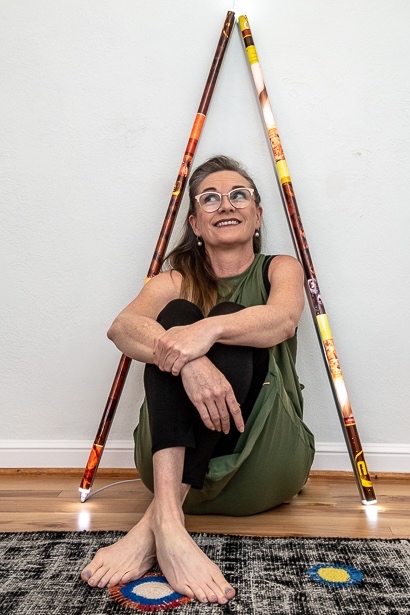 Let’s just say artist Tara de la Garza is a bit trash obsessed. “As a child, a trip to the ‘tip’ (dump) was always an adventure,” said the Menlo Park resident who is of Irish descent but grew up in Australia. “Furniture, electronics, bicycles, all sorts of treasures could be found.”

Later as an adult living in New York where trash is omnipresent, “my interest became an obsession. A series of gutter trash photos was followed by detailed drawings of piles of trash bags left on the sidewalk every day.”

So, when she landed on Peninsula, one of her first stops was a visit to Recology. “People come from all over the world to see the Big Green Machine sort the waste. I have several videos of mesmerizing plastics rolling through the sorter and light waste plastics being discarded back to landfill.”

There in lies the rub, also known as the plastic lie: “Since 2018, our recycling is no longer taken by China and often ends up in unregulated trash piles that are openly burnt in South East Asia. The toxic fumes harm the local inhabitants.

“I want to address this in my work by encouraging the first of the three R’s, reduce, secondly I am reusing plastic waste in my artwork series that I’m calling Monuments to the Plastocene.”

She showed us two tube lights with recycled plastic bags as gels when we visited; there will be a total of nine on display when she takes part in  SF Design Week June 20 – 28.

“This is a pivot for me,” she said. “I’ve never done any sculpture before, but I like challenging myself.

“I really have bee-in-my-bonnet about the lie we were told about recycling. This is my attempt to elevate the material and to give it some value.”