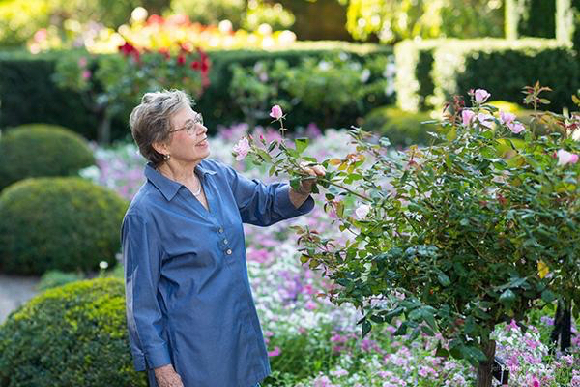 Suzanne Legallet, a longtime volunteer at Filoli Historic House and Garden, is serving as honorary host of its annual gala and auction taking place on Friday, September 13. While the gala raises funds for all programs, projects and events, the proceeds from this year’s Fund-a-Need will benefit the nonprofit’s internship program — which Suzanne has supported, in part, by hosting more than 40 interns over the past 23 years at her Atherton house and garden.

“Filoli has so much to offer everyone it touches, but the internship program holds a special place in my heart,” said Suzanne, herself an avid gardener. “I have had the pleasure of welcoming Filoli interns from all over the world into my home, seeing them develop their skills and careers in horticulture, and being inspired by their stories and passion for living a good life. It has been a truly enriching experience for me. Filoli, with its dedication to preservation, innovation and education, is a cause not only worth fighting for but also deserving of further development.”

“Fight for a just cause,” “Love your fellow man” and “Live a good life” are the three parts of a personal credo that inspired Mr. and Mrs. William Bowers Bourn II, prominent San Franciscans at the time, to name their country estate “Filoli” when it was built in 1917. That credo continues to inspire generations of people who, like Suzanne, dedicate their time, talents and resources to maintain Filoli’s place in the world.

Since 1977, Filoli has trained 400 interns who have become leaders in the fields of horticulture, landscape preservation, landscape architecture and public garden management. Recently, the internship program has expanded to offer learning opportunities in more disciplines, such as museum collections management and curation, education, interpretation and marketing. Suzanne has pledged a generous initial contribution to be matched by former interns in support of the growing program.

“There are countless ways that Suzanne has been a foundational support to Filoli’s internship program,” said Jim Salyards, head of horticulture at Filoli. “From the generous act of hosting students from all over the country and world to the way she takes each intern under her wing and shares gardens, Bay Area culture and lasting friendships with each one, her dedication to Filoli and the internship program amazes and touches me daily.”

Suzanne took one of the first tours of the garden after Filoli was opened to the public in 1976 and became a docent in 1977. Since then, she has taken on a multitude of projects and roles. Throughout her 42 years of service, she has served on or chaired numerous committees, including the Friends of Filoli, garden and development committees, as well as the Filoli Governing Board. She started the self-guided tour program in the mid-1980s, established the annual Flower Show in 1999, helped create the Garden Information Services program in 2006 and worked with Salyards to establish the perennial Summer Sculpture Exhibit in 2014.

“Suzanne is a true treasure of Filoli,” said Kara Newport, Chief Executive Officer at Filoli. “She has had her hand in many pots and has been a force behind innovation and evolution through her time. Though she has a love of plants and gardening, her real passion has been supporting and nourishing the Filoli interns — she loves to see them flourish and has remained connected to many of the hundreds of interns that have passed through the Filoli experience.”

Filoli is located at 86 Cañada Road in Woodside. Tickets to tonight’s event are available on Filoli’s website. A list of Fall events is also online.