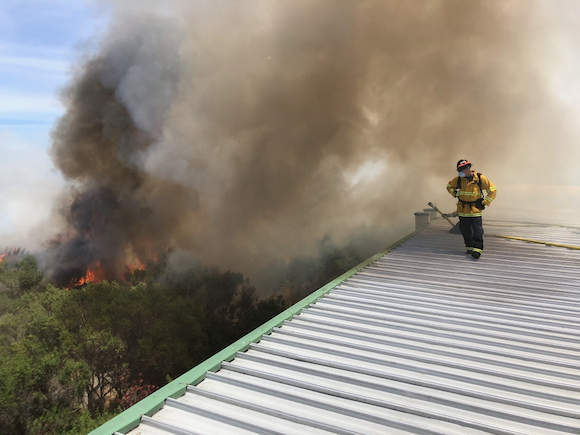 Numerous calls to Menlo Fire were received shortly after 11:00 am yesterday reporting “bushes on fire behind the [self storage] facility” and “homeless encampment fire.”

Arriving on scene Menlo Fire Captain Hendrix and crew on Menlo Fire Engine 1 arrives on-scene at 11:19 am, reporting “heavy smoke visible and a working fire behind the storage facility, in the open space.”

Acting Battalion Chief Villa arrives and reports that “… a two acre fire, wind driven, with a slow rate of spread. The best access to cut off the head of the fire will be at the Cal-Trans pump house, along Bayfront Expressway and traffic control is needed.”

Battalion Chief Coyle arrives and requests Cal-Fire Dozer 1741 at 11:21 am per the new deployment protocol and strategy. This is third fire in this area in one week.

The Dozer arrives at 12:45 pm along with a Cal-Fire Battalion Chief and two Hand Crew units. Menlo Park Police put out a notification to avoid the area and smoke warning for motorists. 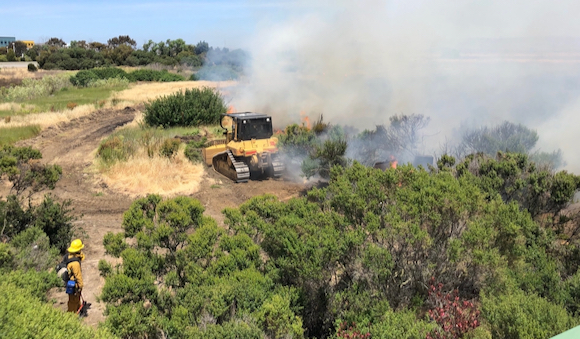 A second alarm is requested at 12:40 pm for additional staffing. A special off-road unit Type 3 Fire Engine is requested from San Mateo County Fire along with a Water Tender from the Woodside Fire Protection District that arrives at 1:05 pm.

The fire slowly spreads to 5 acres, firefighters establish a defensive structure protection perimeter (fire is allowed to come no closer than 30 feet from each building) around the Self Storage Facility and other businesses.

“We are using a new containment strategy we discussed yesterday and have activated today,” said Fire Chief Harold Schapelhouman. “If there is no life safety risk (people) in these encampments, and/or if our Battalion Chiefs and Captains feel they can better manage risk to the adjacent residential and commercial structures, even though the fire may further spread into the surrounding open space, they can set up a containment line and let the fire come to them.

“If we can avoid it, we are trying not to have our firefighters go into these large encampments. We have found open pits used as toilets or for garbage, that can include drug paraphernalia, self protective measures like trip wires, or worse yet, some hostile inhabitants who have proven they are not afraid to take on police officers.”

Menlo Fire Investigators believe that two people self evacuated from the encampment prior to the firefighters arrival. There is also concern that the fire was intentionally started. The fire size is estimated at 5.5 acres and the cause is still unknown.

The fire was brought under control at 2:32 pm with a full containment line. Additional grass, vegetation and fuel loading was allowed to burn off to reduce the risk of rekindle and to help prevent new fires from easily starting in the months ahead.

“This area and the frequency of these incidents have been becoming a larger and more complicated problem and risk for years,” said the Chief.  “As firefighters, we can’t solve the larger social issue that tends to not only be uncomfortable and rarely discussed, but certainly isn’t being solved here. Further complicating this particular location is that it is considered a protected and environmentally sensitive habitat.

“The  reality is that upwards of up to 60 people at times have been living in here for years with no toilets, no water, no power, no garbage service and it’s no longer what some believe it is. Bottom line, it can be an actual threat to the community, public safety and our personnel. We will continue to do what we can do, but certainly more aggressively. I’m happy to talk to anyone who can help or wants have an honest conversation about actually solving these issues because it’s getting worse and not getting better.”