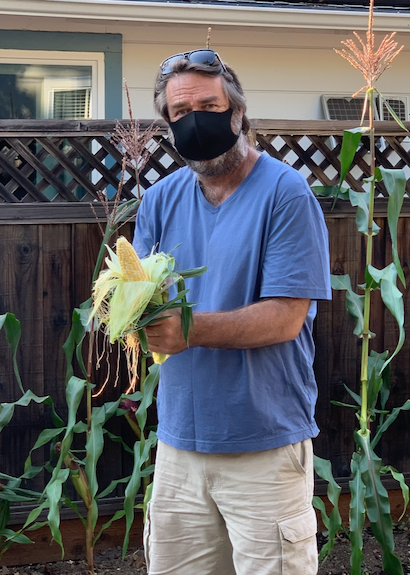 Menlo Park resident John McDonnell explains that gardening is in his blood. “My family has owned and operated a number of nurseries in the Bay Area,” he says. “The last  remaining one is on Moraga Way in Orinda.”

While he worked at one of the nurseries when he was in high school, law school beckoned. Today he is the Managing Partner of McDonnell Law Group, serving the legal needs of public and private technology companies.

When the shelter-in-place order came in March, he decided he wanted to do something that could be done around the house and shared with his neighbors on the small, private lane he and his family live on. The outcome was a linear corn patch planted along the fence line. 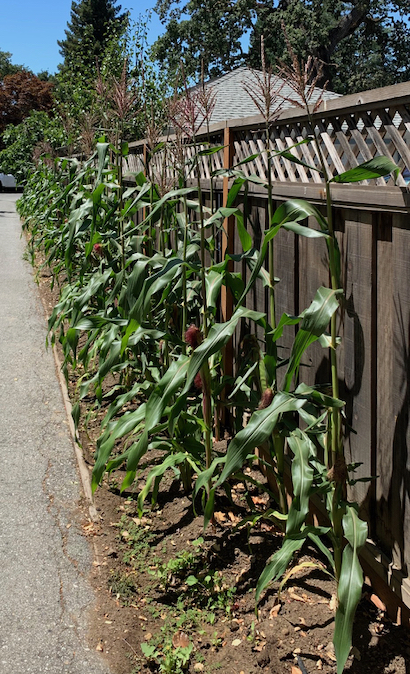 Over the weekend, with a successful crop ready for harvest, he hosted those neighbors for a corn fest on their lane, with proper social distancing by neighborhood families.

It began with a corn picking lesson followed by harvesting the corn and then roasting the fresh corn on the BBQ. Everybody was asked to share at least one corn-related story whether funny, meaningful, or thoughtful. In addition, attendees were asked to write something on a specially designed “Corn Fest 2020” T-shirt, which was raffled off at the end of the evening to lucky winner Neela Gentile.

When asked about his thoughts for holding a similar event in 2021, he added, “I think it was great for everyone in the neighborhood to have this safe, wholesome, and communal distraction, especially with the shelter in place order and all that’s going on today. And while I have a feeling ’21 is going to be a good year, I think another Corn Fest will happen. Maybe we expand it to other neighborhoods in Menlo Park. Or maybe that’s a bit too corny! We’ll see.”

Photo of John by Linda Hubbard (c) 2020; photo of corn by David Sowerwine