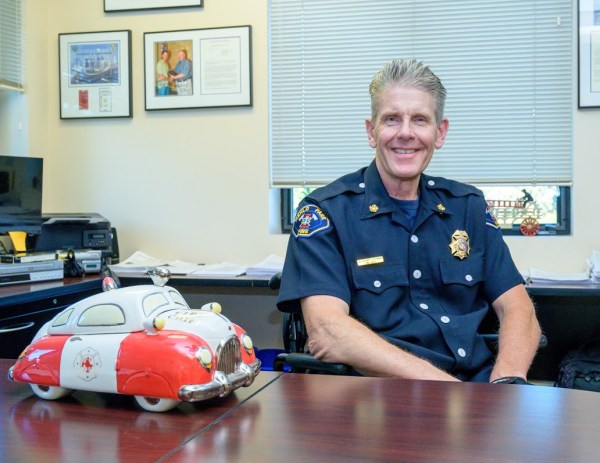 Harold Schapelhouman was asleep in his bunk bed at the Los Altos’ El Monte fire station some 40 plus years ago when he was awakened at 2:00 am by a tap on his shoulder. “My two fellow student fire fighters were leaving to take the Menlo fire test and wanted me to come with them,” Harold recounted, sitting in his office at the Menlo Park Fire Protection District headquarters last night. “I told them, ‘No, that’s not my plan.’ I wanted to stay disciplined and finish my education.”

After further prodding, he did get in the car, arriving at Menlo Fire Station 1 before dawn. “The line was wrapped around the St. Patrick Seminary property,” he recalls. “We knew the number of test takers was limited to 100.” 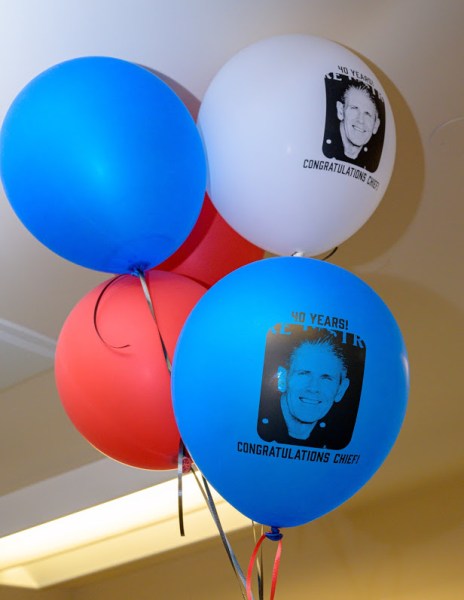 After the written test—”I evidently passed,” quipped Harold—applicants came back for a physical ability test which was divided into five different situations that fire fighters could find themselves in.

“The most memorable for me was running upstairs with a hose pack. I had no idea what I was doing but luckily I was strong from working construction jobs. But  I almost lost the pack out one of the windows. Finally, I made it to the top landing and threw the pack over the  finish line and jumped on top of it.

“These tests were intimidating because if you didn’t pass a section, you were gone. I watched 17 people not make it.”

The next step in the process was a face-to-face interview. “I bought a book called Sweaty Palms and practiced looking people in the eye. Gary Owens, one of my first captains asked me: ‘Will we ever regret hiring you?’ I replied: ‘I will be the hardest working fire fighter from the day I start until the day I retire.'”

Now that day has come for Harold Schapelhouman who has been Fire Chief since 2007.

“It’s exciting and a little unnerving,” he says. “There are a lot of things I want to do!”

Tomorrow, on his first day of retirement, he was planning on going out for coffee with friends but, ironically, duty calls. “A woman is going a project about the Oklahoma City bombing [he took part in the rescue efforts], and she wants to interview me.”

The Fire Service is not just a job or just a profession but rather it is a Calling.

Harold responded to that Calling as a young man 40 years ago and he has never either looked back or failed to live up to the principles of that Calling. He has held almost every rank in the Fire District and held each with distinction.

He has served our community both here and throughout the nation in responding to many disasters including Oklahoma City, World Trade Center, the Columbia Space Shuttle recovery and too many hurricanes to count.

I am confident that if Harold had the choice, he would be working at the pile in Sunrise Florida today rather than being here at this ceremony.

He is outspoken on any issue where there is a threat to our community even when doing so was not politically correct.

He has helped make the Fire District one of the most innovative in the Nation and he was one of the key players in the creation of the National Urban Search and Rescue Teams.

Although he had earned his full retirement a decade ago, he has continued to serve for ten more years because of his love for the Calling and his devotion to our community.

And the unsung heroes behind every firefighter are her/his family who patiently waited for them to return from extra shifts and long deployments and who supported them every step of the way.

We owe Harold and his wife Lada and daughter Meg a huge Thank You!