Spotted: on the “Boulevard…” 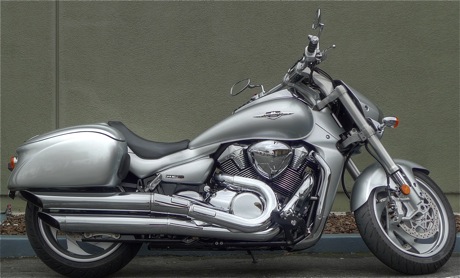 True, there are no streets in Menlo Park, as far as we know, which contain a ‘boulevard’ in their name (though there is a City planning project dubbed “Grand Boulevard,” apparently aimed at sprucing up El Camino Real). However, there is this very shiny motorcycle, a Suzuki Boulevard, spotted at Hudson Auto Care, aka the Shell station at Middle and El Camino.

Asked if the machine were his, station owner Richard Hudson (whose father started the business 57 years ago) said that you’d “never get him on one of those things.” And for good reason; this $15,000 cast-aluminum, 125-horsepower “beast” features scary performance, according to those who’d know.

All we know, lacking an introduction to the owner, is that it looks really cool and shiny, especially under the soft, even illumination of a typically-gray Menlo winter day.

If you want to read a fascinating article about high-end motorcycles and one person who loves them, look at “About Motorcycles” by Frederick Seidel in the November 2009 issue of Harper’s.

Brings back some faded memories of “Zen and the Art of Motorcycle Maintenance” – although I can’t imagine actually working on this beauty!