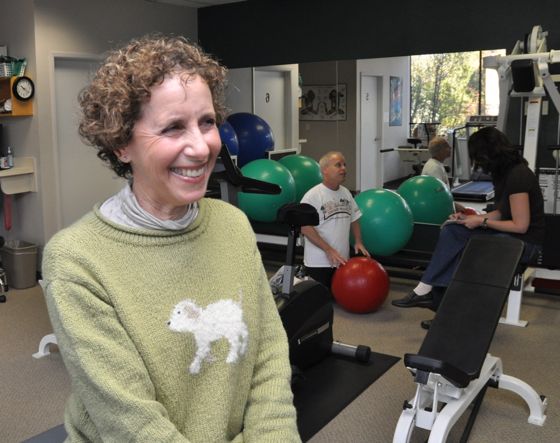 What Robin Tobias has never lacked is fans, also known as very pleased clients. They pop up on Yelp and get routed to her through strong word of mouth, not to mention physician referrals. It was her fan base, built over her seven years as head athletic trainer at Menlo School and College, who kept urging her to open up her own physical therapy practice.

The idea had been percolating in her mind when she noticed a ‘for rent’ sign on a two-story medical building on Crane St. in downtown Menlo Park.  It was just a small space, so with a huge gulp – buoyed by her mother’s encouragement – she took the leap.   That was in 1985. Today Tobias Physical Therapy has three times the space with seven physical therapists offering their services.

Robin credits much of her success to Julie Rodriguez, who is her practice manager. “I know physical therapy,” she says, “but I didn’t know how to run a small business. Julie does.”

Asked how clients who come to her Menlo-based office differ from people seeking the services of a physical therapist in other geographical locations, Robin was quick to respond: “So many of our clients are so focused and so specialized, in both their work and their play. They don’t want to hear ‘stop’ and are very pro-active about their therapy.”

What’s Robin’s advice for standing a better chance of avoiding her services all together? “Move, move, move,” she says.  “Don’t stop moving and keep exercising.”

Robin is absolutely the best Physical Therapist I know of. Her compassion and her knowledge and willingness to share it, are unsurpassed. Her success is well-earned and deserved.

There can’t be two people in this world with your name! I am a client of Tobias. Send me an email if it is you and tell me how you are doing!