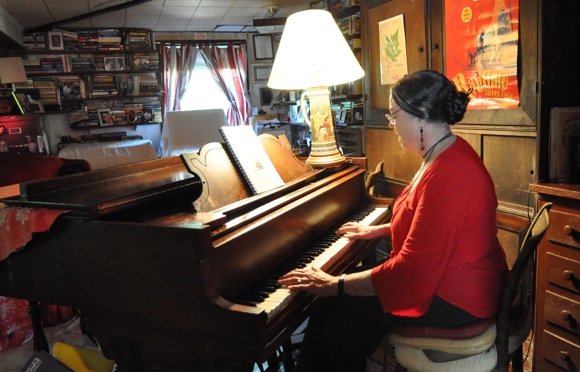 Picture, if you would, a women playing ragtime in her log cabin home. No, it’s not some turn of the century scene but rather Nan Bostick at the piano in Menlo Park.

The Menlo-Atherton grad bought her Felton Gables log cabin home in 1969. It was a great place to raise her son. “He and his friends couldn’t do anything to shake it,” she quips.

Retired from a career as curriculum writer and educator, Nan grew up playing classical music. “I quit piano until I was 54 years old – life begins when the mortgage is paid off, the kid is gone, and the dog dead.” 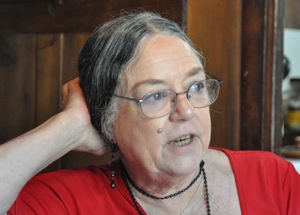 Research on a book about her great uncle Charles N. Daniel, a ragtime era composer and sheet music publisher who helped Scott Joplin promote his first rag in 1899, piqued her interest in ragtime. Writing the book soon took a back seat to playing ragtime piano; she found herself rehearsing three hours a day.

“Ragtime was America’s first contribution to popular music,” says Nan. “You put some blue notes in it, and you have Dixieland jazz.”

It’s not easy to catch Nan at home in Menlo. She travels the country performing at ragtime festivals (she’ll be at the West Coast Ragtime Festival in November in Sacramento) and presenting multi-media musical programs to schools.

“I think the school circuit is the most important thing I do,” she says. “But I also do a lot of festivals, which are a lot of work. You’re playing to the choir – people who are already ragtime fans – rather than introducing the music to potential new enthusiasts.”

Ironically, Nan has done few local school programs and appears in Menlo just once a year at a 4th of July performance held at the First Baptist Church on Middle Avenue.

“I’m trying to cut back on the travel and finish the book I started on my uncle,” she says. “And it’s time to put my own house in order. This old place needs lots of work.”

Nan welcomes local inquiries about speaking or performing ; she can be contacted by calling (650) 328-5792 or emailing rtnan@earthlink.net.

And, just for the record, Nan has quite a singing voice, too. Just ask her to belt out a tune.

I heard Nan at the Ragtime Festival, Greenfield Village, The Henry Ford, Dearborn MI, this summer. What a great person – performer, warm friendly personality. I ordered 3 CDs from cdbaby. She is on youtube, as well.

Nan is MUCH prettier in person!

Nan was quite a woman. Though I never got to meet her in person, she helped me immensly with my ragtime interest.

I first came across her playing Charles Johnson’s “Dill Pickles” from 1906 on YouTube. I fell in love with her beautiful execution of this 3 over 4 melody. I was hooked! So I searched her up and found even MORE of her playing; particularly her Uncle Charlie’s music. I knew I just HAD to learn this newly found music style. I contacted her shortly after and asked for some general information about ragtime….What was it all about? Why is it so important? She was such a great help! She told me everything I could’ve ever wished for about ragtime. She even sent me music to learn that would help ease me into the difficult stylings of ragtime (her uncle’s “Margery” being one of them). We kept in contact since then. She was, more or less, a mutual music instructor.

As many people were, I was saddened to hear about her passing this past March. But her legacy will live on through musicians, such as myself, who have gotten to know her and grown to love her.