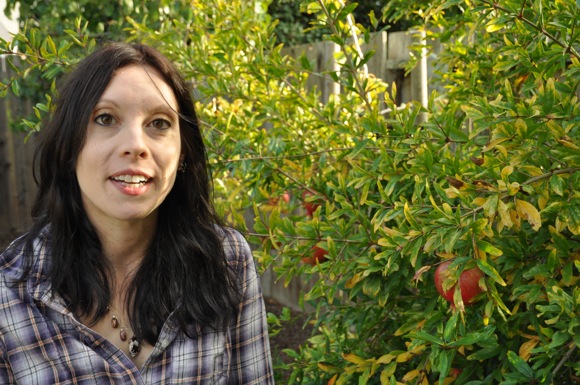 Midwestern transplant Amy Ball moved to Menlo Park this past February. A foodie at heart – a vegan foodie to be exact – she’s excited that the east Menlo home she and her boyfriend are renting has a fig and pomegranate tree in the backyard. “We’ve added raised vegetable beds,” she says with the enthusiasm of someone who thinks a lot about cooking and food.

A chef by training – she graduated from Natural Gourmet Institute for Food and Healing – Amy became a vegan 10 years ago. “I think of it as whole food cooking,” she says. “My little brother was diagnosed with leukemia when he was five and needed a special diet. I’d put together menus for him because I always loved cooking and grew up with a garden and a Mom who canned jellies and jams.”

After a stint as lead chef at Slice Cafe at Google, Amy is now assistant chef at Palo Alto Community Child Care. She’s also blogging tasty vegan recipes daily at WholeFoodVegan. “It’s basically a chronicle of whatever I’m making that day,” she says. “I’m sort of a mad scientist in the kitchen. ”

Life other vegans, Amy knows the rap against this lifestyle eating choice. “People thinks it’s expensive, time consuming and doesn’t taste good,” she says. “Those are the common misconceptions.”

Amy has embraced Menlo Park in the same way she’s embraced her diet. “Living in Menlo is great – there’s so much healthy food around. I feel I’m really lucky to have landed here.”

Someday she may like to open a restaurant, but her sights are lower at the moment. “I really like being able to get vegan choices and options out there,” she says. “And maybe it would be great to open a little bakery.”

It’s nice to know there are healthy people out there who love good food. Amy seems to love and know about food. Her Blog is GREAT! ! She is in the right place which is Menlo Park CA…

you go amy miss ya