Updates about Santa Cruz Avenue’s most iconic houses appear to come in pairs. A couple of weeks ago, the focus was on the construction going on at the “jewel of Santa Cruz Avenue.” Now our attention turns to the “other” brick house, the one across from St. Raymond Church.

Retired philosophy professor Arnold Wilson and his wife Paula Hillard, head of gynecology at Stanford, bought the house five years ago, having fallen in love with its craftsman features recounted in InMenlo’s earlier coverage. They’d been living in Cincinnati (where Arnold taught at the university) when Paula got the Stanford offer.

“We don’t miss the winters,” says Arnold. “Now if we want snow, we can go to Truckee.

“After looking at a lot of homes, we fell in love with this house and love the location. Being so close to downtown, we have a dozen restaurants within walking distance.”

While the brick exterior of the house remains, they’ve done some eco-conscious modernization, including installing 30 solar panels for electricity and 50-gallon rain barrels that help provide irrigation for the veritable mini-farm that fills the front, back and side yards. 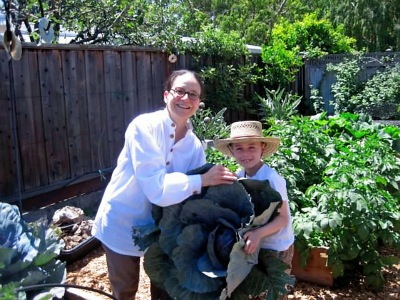 “We have about 24 fruit trees, about half of which are new and the other half mature” says Arnold, giving his visitor a tour. Gone in the front yard is the suburban traditional grass, replaced by a bevy of raised beds that are planted with vegetables year round, the largest of which is four-by-20 feet.

“In a sense the house has absorbed my energies post teaching,” Arnold says. “I still do some writing and go to occasional conferences, but this yard keeps me busy.”

He’s aware that the house catches passerby’s attention. A rainbow-colored gay pride flag has long flown from its porch, and an American flag was added more recently. “Our wedding anniversary is July 4,” says Arnold. “We want to reinforce that idea that America is the land of liberty and freedom.”

When people stop at the house, some are curious about the solar panels while others want to talk about the garden. Arnold says he enjoys consulting about how to utilize raised beds.

Given that there are two of them, the fruits of Arnold’s labors are often more than the couple can eat. One solution was to offer picking rights at a charity auction. “As a result, we have these boys who come and pick and that’s been great,” he says.

As the photo shows, some of Arnold’s vegetables are almost as big as the boys!

Photo of Paula, boy and cabbage courtesy of Arnold Wilson