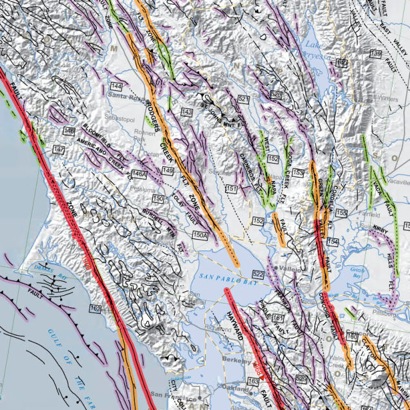 Yesterday at 3:20 an local time, the northern San Francisco Bay Area was struck by the largest earthquake to impact the Bay Area since the 1989 M6.9 Loma Prieta earthquake. Yesterday’s earthquake appears to have ruptured on or just west of mapped traces of the West Napa Fault, the most seismically active of the faults mapped between the longer Rodgers Creek Fault on the west and the Concord-Green Valley Fault to the east. USGS has named the earthquake the “South Napa earthquake.”

“USGS scientists are working around the clock to understand the earthquake and relay information to emergency managers and the public,” stated Tom Brocher, Director of the USGS’s Earthquake Science Center. “In less than a day we made tremendous strides in understanding what happened and have crews of scientists continuing to investigate this event.”

Damage is localized in the region surrounding Napa due to the rupture directivity to the north-west. River valley sediments in Napa Valley likely contributed to the amplification of shaking around Napa.

GPS receivers operated by the USGS and others also measured a shift of the earth of a few inches caused by the earthquake. Yesterday, USGS geophysicists made additional measurements of the earth’s movement that will refine models for the earthquake movement.

USGS analysis of the seismic recordings indicates the earthquake rupture propagated to the NNW and upward, directing the brunt of the earthquake energy to the NNW towards Napa. The dozens of aftershocks that have been recorded to date are also aligned on this NNW trend. At this time (one day after the mainshock) the probability of a strong and possibly damaging aftershock in the next seven days is approximately 1 in 4.

Today, USGS technicians will be retrieving additional seismic data from several seismic stations that either do not automatically communicate their data to us or failed to do so. They will also be deploying additional recorders in Napa. These data should help refine the ShakeMap showing the intensity of shaking throughout the Bay Area and better understand the strong shaking experienced in Napa.

The Earthquake Early Warning test system functioned as designed in yesterday’s earthquake. Within five seconds of the earthquake it produced a warning (estimated at magnitude 5.7 within three seconds of its occurrence), sufficient to provide warning to Berkeley, San Francisco, and areas farther south. No warning would have been possible within 20 miles of the earthquake. EEW prototype was developed by the USGS in partnership with the UC Berkeley, California Institute of Technology, University of Washington, and the Gordon and Betty Moore Foundation.

The USGS in Menlo Park issued this update on the West Napa earthquake at 8:00 am this morning.

I live in Guerneville, Ca. I felt the Napa earthquake at 3:21 am this past Sunday. I have experienced earthquake before, and when this one woke me up, I knew it was big…to the extent that I got out of bed and ran to the hall for protection! At that time, not knowing where the epicenter was, I figured that it was at least a 5.5.
This morning I was , once again, awakened by a jolt. I realized that it was an aftershock.
I an wondering if there is a fault line that runs from Sonoma to Guerneville?