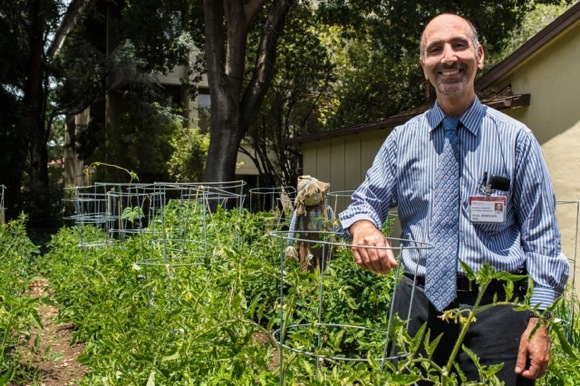 Growing up in Lindenwood, Dr. Paul Jemelian’s backyard always featured a vegetable garden, lovingly tended by his mother. The gardening bug bit him early, and through friends, he spent three summers on a Iowa farm. Ultimately he chose medicine over farming.

He’s been able to blend the two pursuits since joining the Menlo Medical Clinic two years ago, turning what he describes as an area “with a few dead trees and lots of weeds” into an eighth of an acre vegetable garden.

“It’s for everyone here,” he says. “Everyone is welcome to come enjoy the garden and what it produces.”

His planting began this year in March with a variety of tomatoes, onions and potatoes, and a little cilantro. It will evolve over the summer, ending in the fall with a pumpkin patch.

The plants are watered via a drip irrigation system he installed, with each row being individually controlled so there’s no over-watering. The two scarecrows that guard the garden were given to him by a nearby resident after Halloween last year.

On Fridays, he sends out an email announcing what is ripe and ready to be eaten. “I think the garden fits well here,” he says. “We care for our patients and through the garden we care for each other.”

Thank you for highlighting Dr. Jemelian he’s a wonderful gardener and a thoughtful caring Physician !

Great job! Thank you for your example.