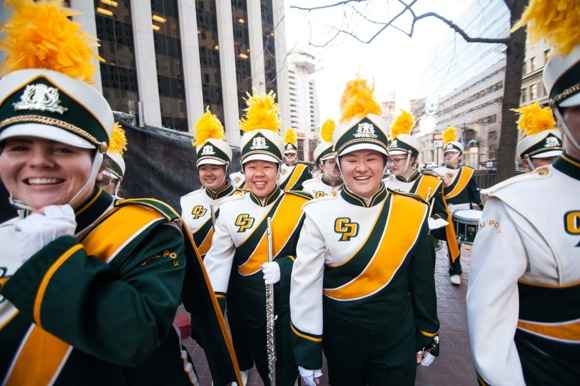 When the Cal Poly Mustang Band took first place in the adult marching band category for the third year in a row at the Chinese New Year Parade in San Francisco, Menlo Park native Caroline Hodes was among the band members (pictured fourth from left).

“Unlike many of the people in the band, I did not grow up marching in Menlo Park,” says Caroline, who attended Menlo-Atherton High School and Oak Knoll School, where she first learned to play the flute. “There are no marching bands in Menlo Park or Atherton.”

Nearly half of the band’s musicians are students in the engineering department, including Caroline, who is an industrial engineering major.

Explains Caroline: “I like meeting people from all different majors, especially because I live and take classes with mostly engineers. I also like playing in a large ensemble. There are over two hundred people in the marching band at Cal Poly, and in high school I never played with more than 30 other kids.”

This was the third year the band was invited to perform at the New Year Parade, which was started in the 1860s by San Francisco’s Chinese community to educate and share their culture with the greater community. The parade and festival have since grown into the largest celebration of Asian culture outside of Asia.

The Mustang Band performs for nearly 50 occasions on campus each year, including athletic events and university functions.

Caroline’s marching days aren’t over when she graduates. “I’m going to join the Cal Poly Alumni Band,” she says. “Band alumni come back every year and march with us during Parents’ Weekend. I also want to learn the piano and guitar!”