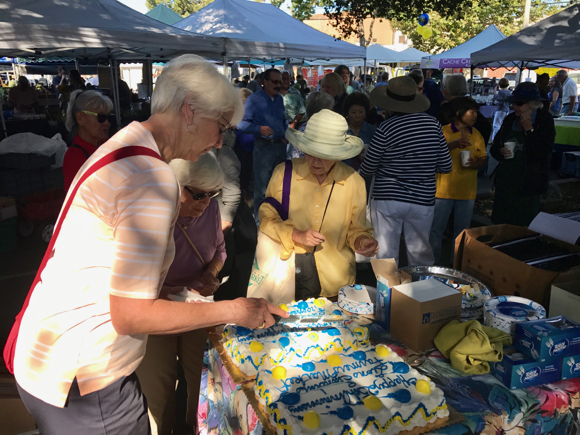 It was a day for celebrating at this morning’s Farmers Market in downtown Menlo Park where festive balloons lined the marketplace. A group from the sponsoring Lions Club was on hand to present the vendors with commemorative plaques and hand out cake to market goers.

We chatted with Lori Hennings who has been the market manager since it first opened in 1992. She told us 19 of the 40 vendors that rotate through the market seasonally have been there since the beginning. We think that’s remarkable enough to list them: F/V Anne B (Pietro Parravano), Heirloom Organics, Four Sisters Farm, Kashiwase Farms, Mellow Nursery and Farm, Medinas Berry Farm, McGinnis Ranch, Brookside Orchids, K & J Orchards, Halog Farms, Twin Girl Farms, Mello-dy Ranch, The Fruit Tree, Bounty of the Valley Farms, Hamlow Ranches, Happy Quail Farm, Swanton Berry Farm, and Tunitas Creek Aviary.

“In many cases the children of the founders have now taken over from their parents in helping customers at their stands,” emailed Lions member Jitze Couperus. “Of the rest of the farmers, many joined soon after the beginning and have  been coming for over 20 years. Just a few have been with us for less than 10 years.”

Organized and run by volunteers who are members of the Menlo Park Lions Club, the stall fees collected from the farmers go into the coffers of the Club where, after paying expenses, the money is donated to deserving causes of various kinds — over $800,000 over the years. In addition, volunteers from the Lions Club collect excess produce donated by the farmers every weekend for distribution to help those in need, calculated to be approaching 900,000 lbs.

“Started by a motley group of ignorant amateurs a quarter of a century ago, we really had no idea what we were getting into or what the result would be,” continued Jitze.

“But most of all, without the loyalty and enthusiastic support of our customers that little spark of initiative would have long since been quenched, and a valuable community institution could never have grown to where it is today.”

As the owner of Heirloom Organic Gardens I am happy that we have been at the Menlo Park Farmers Market since the first market. According to my records, we are also the only vendor to have attended every single market in its history! I hope that the residents of Menlo Park appreciate the efforts involved in this wonderful selection of fresh produce and other products. Just our stand has a selection of vegetables all year that ranges from 70-100 different vegetables. I encourage all readers of this website to check out the market and the happy atmosphere that it generates. I know that I love to talk to the interesting people that patronize the market.
I learn from you all and I hope that our information about how to creatively and simply use the vegetables for flavor and nutrition makes a difference.
Enjoy the market and discover the fun if you are not a regular attender.