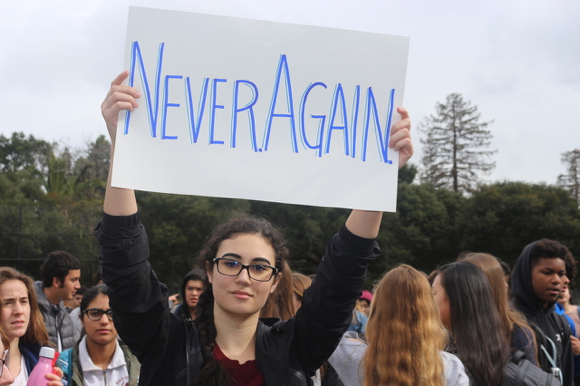 We at InMenlo are big fans of photography and blessed to have such a great crew of contributing photographers. We also try to support emerging photographers, in particular, those attending local high schools. In that spirit, we showcase some reflections on last week’s student walkout that raised awareness about gun violence on school campuses from Menlo-Atherton High School sophomore Lena Kalotihos, both in words and pictures.

While Lena has been making stop motion films since 5th grade, digital photography is new to her: “Honestly, serious digital photography was never really something that I was interested before Ms. Frivold’s class because I just didn’t know that much about it. Sure, I have an Instagram account with some mediocre iPhone photos, but I had never properly taken photos with a digital camera…I decided to take photography this year because I was interested in improving my photography skills for my stop motions and I wanted to see what the world of photography had to offer. I also thought that it might be something that would interest me because I like doing projects that inspire or move people in some kind of way.” 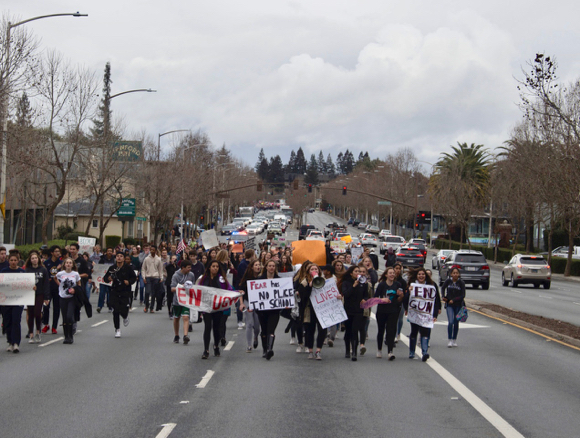 Photographing an event of this kind was a first for Lena: “I was determined to capture every angle of the march, even if this meant climbing things to get a better angle or running up El Camino to get ahead of the whole crowd. I wanted my photos to capture the spirit and dedication of the students, to encapsulate the power of this student generation, that we aren’t going to sit around and accept the current political climate, particularly on issues that directly affect us.

“Once we were at El Camino Park, I stood on benches and climbed on top of trash cans in order to get a more aerial view. But I wasn’t really satisfied with [the results] because they were all from the side of the crowd; I wanted to get in front of the crowd to better capture the facial expressions and signs. Thus, I made my way to the top of the bleachers with the 10 other people up there giving speeches. I’ve never been too keen about putting myself in front of a crowd, especially one of this size. So to stand up on the bleachers with the presenters while everyone was looking at me was kind of nerve racking! 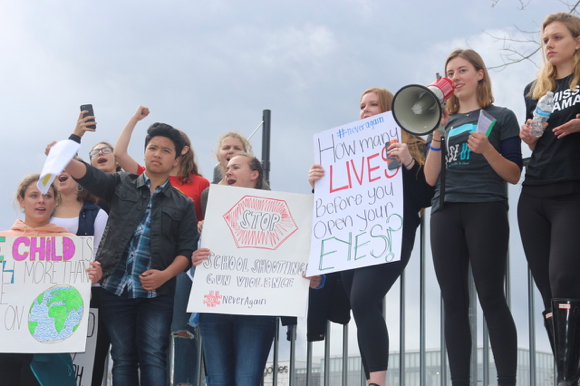 “When I came back to M-A with the photos and sorted through all of them, Ms. Frivold asked me if I ever felt disconnected from the walkout while photographing it. I had not. Sure, I had a large camera in front of my face for the majority of the march, but I didn’t feel that impaired my experience. I just saw the march through a different angle than most other people did.

“If anything, it enhanced my experience because I paid attention to all of the little details of the march, trying to find different angles that I could capture. From on top of the bleachers and in front of the crowd, to crouching in the middle of the swarm of people, I was able to see many diverse perspectives during the walkout. It was an inspiring experience that I will never forget, and I definitely learned a lot from it.” 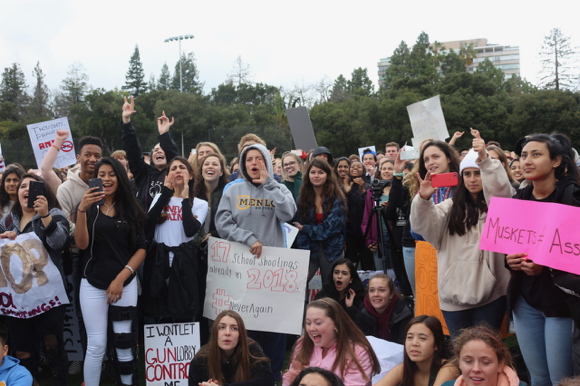 Lena concluded her thoughts about photographing the march with a shout out to Ms. Frivold, who she calls “an amazing teacher.”  “Not only has this class taught me a lot about photography, but I’ve also learned a lot about myself and my interests for the future, through opportunities like the march.”

Note: Two M-A students, Elise Kratzer and Holly Newman, are part of the organizing team of a March for Our Lives affiliated rally on March 24, 2018, at Courthouse Square, 2200 Broadway, Redwood City, from 1:00 too 3:00 pm. There is also a march taking place in Menlo Park that day from noon to 1:00 pm; details here.

Thank you for the wonderful photos and article. I tried to get to the march but was stuck on a conference call and missed it. Your pictures helped me feel like I was there. Keep up the good work!

I like the photos of the March. Good work Lena