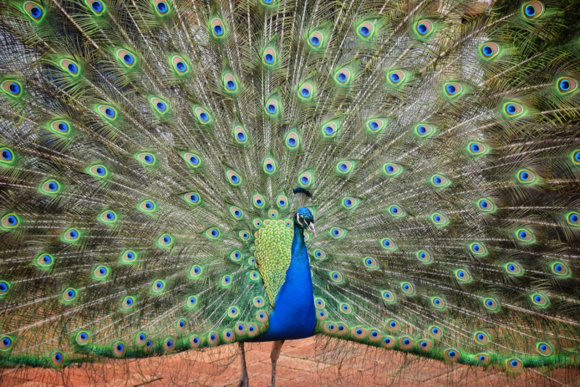 Percy, Filoli’s resident peacock, has passed away. “While it was not uncommon for Percy to wander during the winter season, his absence this year is long enough for us to be certain that he is lost,” said a statement issued by Filoli. “The staff spent these last several months searching but have now decided it is time to close this chapter for Filoli. Percy came to Filoli on his own terms many years ago and loved freely so it is only fitting that he has now left us on his own terms. We know that he lived a long and happy life here in the gardens at Filoli.”

Over 10 years ago, Percy left the watershed property north of Filoli in search of a new mate. While Percy never found a lifelong peahen partner, he did make many new friends and inspired quite a following and came to enjoy the attention from Filoli’s visitors, volunteers and staff. Truth told, he could also be a bit of a pest, but maybe that, too, was part of his charm.

“He was an iconic part of Filoli during his time here and posed for thousands of pictures every year,” the statement continued. “While Percy had a big fan club, he was his own man, not our pet here at Filoli. We didn’t feed him or cage him, he lived off the land for many, many years, but he was always willingly putting on a show for audiences large and small.”

There will be a celebration of Percy’s life on Sunday, February 16, at noon. The staff is also collecting photos that members and guests took of Percy over the years. If you would like to share a photo, please send to percy@filoli.org.  Please sign up online to attend the memorial service.

The Live Wild and Free Fund has been set up to honor Percy and the beauty he brought to Filoli. Donations will go toward installing a memorial plaque in the Visitor Center and caring for the House, Garden, and natural areas where he freely roamed.

We visited a couple of weeks ago and my four year old was looking for Percy. I am sad to hear he is gone. He was a beautiful addition to the beautiful gardens.

I will dearly miss Percy as I formed a special bond with him. He made my visits at Filoli very special. He was a crown jewel of the gardens.

Percy was also one of the highlights of the visit to Fioli Gardens. We will all miss him dearly. Thanks for being there for us all.