Holly Smolik celebrates turning 18 with a salute to Ella 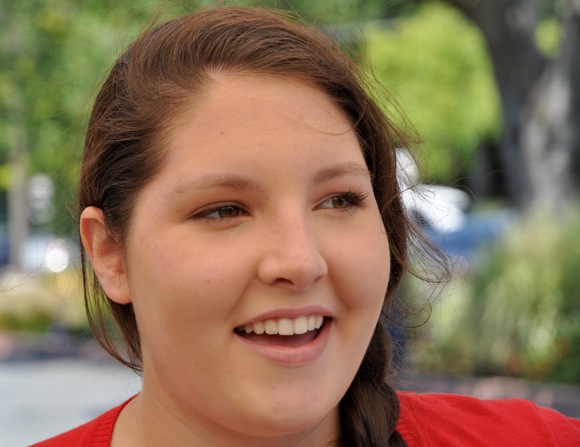 When Holly Smolik takes the stage Sunday as one of the performers in Ella Fitzgerald: America’s First Lady of Song at the Stanford Jazz Workshop, she will have just turned 18 (the day before). Quite a coming of age celebration – one that salutes another singer who started young.

Arranger/pianist Larry Dunlap, who is the concert’s musical director, suggested that Holly would be a great addition to the lineup. “He wrote some charts for me when I was part of Frank Moura’s Jazz Band,” says Holly, who graduated from Menlo-Atherton High School in June. “When I got asked, all I could think of was ‘what an honor.'”

While Holly is drawn to jazz now – “it’s the most fun and in a sense the most challenging because of all the stuff you have to learn to be good,” she says – she grew up singing pop. “And I mean pop like children’s pop, Disney stuff.” Other than her brother, who’s nine years older and played trumpet in Moura’s band, she didn’t listen to jazz. But now she’s “really into” Thelonious Monk and also likes Nancy Wilson and John Coltrane. And, of course, Ella.

This will not be Holly’s first appearance at the Stanford Jazz Workshop. She attended the Jazz Camp five years in a row. “It’s a really great camp – very influential,” she says.

It’s a busy summer for Holly. In August she’ll be appearing in the Palo Alto Children’s Theater production of Barnum where she plays a Swedish opera singer. It’s her first musical outside of school productions at La Entrada and M-A.

Rather than heading to college, Holly plans to spend the next year concentrating on her music. She’s hoping to audition for American Idol and pick up some other local gigs – and eventually move out of her parents home in Ladera. “My parents really like music and appreciate what’s good,” she says. “But I’d still like to be able to afford my own place and get out of their hair.” Spoken like a true 18-year-old.

Note: Alisa Clancy, who InMenlo profiled earlier this year, will be doing a pre-concert lecture at 1:30 pm; the performance begins at 2:30 pm. Tickets are available here. On Saturday evening, Menlo Park residents Tuck and Patti are performing as part of the Jazz Festival at 8:00 pm; purchase tickets here.