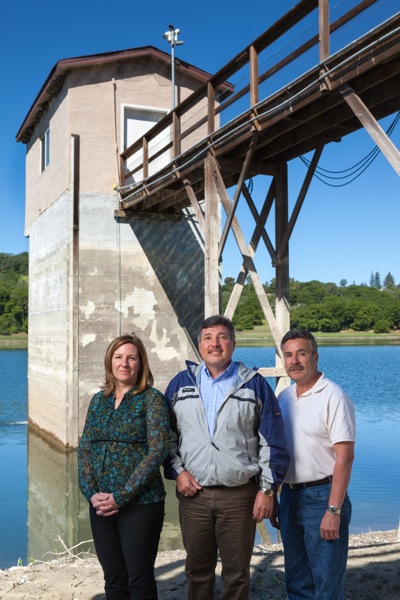 Get off the beaten path a bit, and you’re apt to discover something hiding in plain sight, something actually pretty big. Case in point, the 166 million gallon (at capacity) Bear Gulch Reservoir in Atherton, a body of water much more visible on Google Earth than to area residents.

We paid the Reservoir a visit and chatted with three California Water Service Co. employees who are involved with  its operation — Dawn Smithson, Tony Carrasco and John Gomez (pictured left to right in front of the valve house). Along the way we picked up some facts that we think may be as surprising to people as the reservoir’s existence:

What is going on at the Reservoir? Many trucks going in (loaded) and dumping dirt on the property. This has been going on for a number of weeks.

As per the recent NBC Bay Area News report, the City of Atherton is listed as one of the San Mateo County cities where the water source has 1,2,3 TCP contamination. The contaminated system is identifed as the Bear Gulch Water Treatment Plant.

And here is the detail spreadsheet listing the contaminated systems: