Adriano Farano’s goal is to bring back “living bread’ 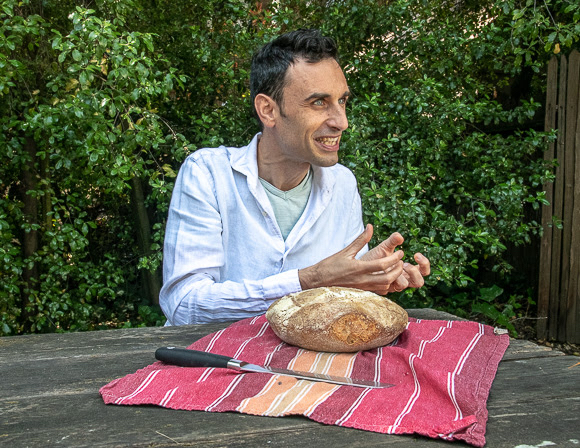 Adriano Farano, a journalist by trade who came to California from Paris on a Knight Fellowship at Stanford, is on a mission to create what he calls “living bread.”

“As a journalist, I try to question assumptions and dig  to find answers,” he said, sitting in the backyard of his Menlo Park home. “While there’s a lot of effort made around wine here in California, that’s not true with bread — at least in my opinion.

“Like wine terroir, I want to know where the wheat was harvested, how the flour got milled. I want to know every step in the bread making process. Bread is the cornerstone of our diet.”

Doing some historical digging, Adriano, who grew up on the Amalfi Coast in Italy, found out that what we in the Bay Area know as sour dough bread started during the Gold Rush. “The miners would keep the sour dough starter close to their chest overnight, so it would stay warm,” he said. “The strain of bacteria responsible for the San Francisco bread’s sour flavor is L. sanfranciscensis.”

Leveraging that sour dough starter, Adriano created his own starter. Believing that the more it travelled, the more biodiversity it would encounter and the stronger it would become, he took it to Italy and “married” it to a 152-year-old starter. The new starter’s name is Viviana. The bread business he hopes to start by summer is Pane Vivo.

He launched a Kickstarter campaign espousing these values:

“The next step is to set up a micro bakery. People can sign up on my website to get notified when I launch it. I’ll be an entrepeneur by day and baker by night! My goal is to sell to friends, neighbors, restaurants and farmers markets.”

Sounds wonderful! I supported him on Kickstarter! I can’t eat conventional wheat anymore – not sure if it’s the gluten, or all the darn glyphosate they usually spray on the non-organic, hybridized wheat mostly grown in the U.S. It was hybridized to make it less attractive to pests – but that also made it harder for many people to digest! I understand that Adriano uses ancient non-hybrid wheat (but grown locally), like they still do in Europe, and makes it naturally with living starter instead of dried yeast. I expect I will do just fine with his fabulous bread!