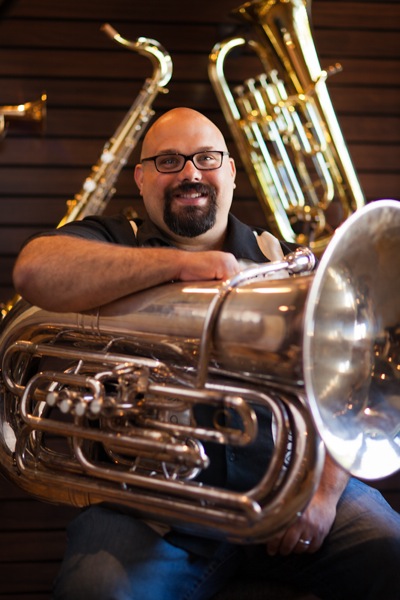 Peer into the window next to the post office on Oak Grove Ave., and you’ll see shiny brass instruments lining the walls. It’s Menlo Park’s new musical instrument store, the first — if not ever — such shop in town and the brainchild of local resident James Manganaro.

A classically trained, orchestral tubist, James’ initial dream was to play professionally. He found himself auditioning for orchestra positions with dozens of other equally talented musicians.  If he couldn’t secure an orchestra position, he was resolved to pursue something else related to music.

“I loved tinkering so I decided to learn how to fix instruments,” he says. “I enrolled at a trade school in Seattle that teaches band-instrument repair.” Moving to Menlo Park with his wife and children, he’s worked the past three years repairing instruments while doing some freelance performing in orchestras and brass bands.

“Eventually I wanted my own shop and Bridgepoint Music is the result,” he says. “Selling and renting instruments grew out of my interest in repair. I want to offer customers instruments that they can have high confidence in.”

Initially James is stocking brass and woodwind instruments but hopes to expand his inventory. Bridgepoint is also well equipped with the tools to clean and repair instruments, including an ultrasonic tank “big enough to clean a tuba” and a lathe and milling machine that gives him the ability to make musical instrument parts that are no longer available.

“I want this place to be really open and welcoming, where people feel comfortable stopping in and taking a look around,” says James. “Eventually I’d like to bring musical education into the store, giving lessons in soundproof rooms. I guess you could sum it up by saying I’m trying to build a music store that is like a music store is supposed to be.”

Best of luck to James and his new venture. It is a very fun store to visit as well.

I’ll be in soon to visit and SHOP! The VERY, VERY BEST to you and your new business. We will support you!!!!