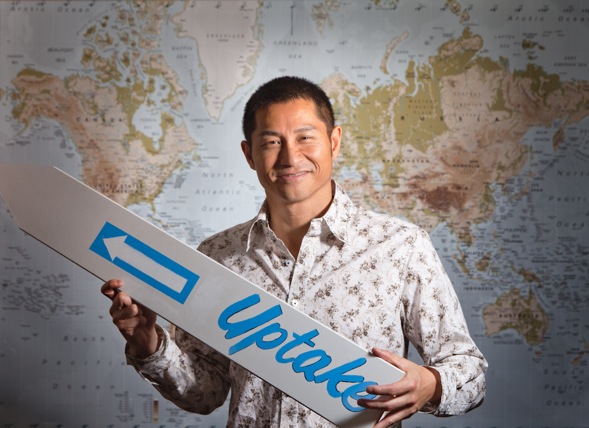 Founded in 2008, Uptake helps travelers create their ideal vacation by giving them recommendations from friends who’ve been there, combined with travel information aggregated from more than 30,000 websites. On a visit to the company’s downtown Menlo Park offices, we talked with c0-founder and president Yen Lee — who previously co-founded CitySearch San Francisco and served as General Manager for Travel at Yahoo! — on a wide range of topics.

InMenlo: Can you tell me a bit about Uptake and how the company landed in Menlo Park?

Yen: The premise is that planning great vacations is just too hard. We’ve spent the last four years collecting reviews and now we can use the same technology to collect your friends’ travel history. We think the combination of the two is extraordinary.

Uptake was built around the culture of teamwork, so we wanted to find an open office space where people could collaborate. We feel lucky to have found this space in Menlo — it fits us. [Editor’s note: the space was formerly occupied by Badgeville, which has moved to a larger space in Menlo Park.]

InMenlo: You say you were “saved by the Internet.” How so?

Yen: When the Internet was Web minus one, I was working as a McKinsey consultant for the railroad and newsprint industries in Ontario, Canada. Then when I was getting my masters at MIT, my McKinsey partner called me and asked me to join him at CitySearch in San Francisco. For a kid who’d survived Canadian and Boston winters, it was a no brainer. I’m still in the Bay Area 16 years later.

InMenlo: What attracts you about competing in open water swims?

Yen: Swimming keeps me sane. I used to run and now I swim with the Stanford Masters. When I compete, it’s in waters that have no big fish with big teeth. I did a 5K race in Lake Okanagan in British Columbia. It’s in the middle of a desert — clean, fresh, warm water!

InMenlo: In your bio on Uptake, you talk about a recent trip to Bali, Lombok, and Gili Trawangan “for surfing, eating, diving and snorkeling without the encumbrances of digital life, not even a Blackberry!” Why those places and did you really make it through two weeks without digital devices?

Yen: Yes, I spent time on a small set of islands off the coast of Bali. It’s a terrific place to unwind. It was the last vacation by myself, without my family. I did take along a Kindle, and three guys joined me for part of the trip. But I was really committed to getting away and recharging.

InMenlo: Do you have a bucket list of travel destination?

Yen: It would include going back-country where there aren’t a lot of people. And returning to King Charlotte Island, where I saw 10 Orcas every day. Also Patagonia, the north island of New Zealand, a walking safari in Africa, diving tour of the South Pacific, and maybe one more eating tour of Europe.

Yen: It’s a vampire book a friend recommended — The Passage by Justin Cronin. I kept thinking, “it’s 3:00 in the morning and I’m reading a vampire book” but I couldn’t put it down!

Anyone who enjoys open-water swims and is a daredevil world traveler is pretty awesome.

Very cool! I still wonder if I could go anywhere without my phone for two weeks. I’d love to say yes, but I’m not sure. 🙂 Loved the Bucket List, it’s given me some ideas as well.